‘Bristol residents are fighting proposals to build new power stations in urban areas. Why are these new dirty power stations planned in the Green Capital, and at a time of climate crisis? And why are the plans being kept so quiet?’

In 2014 the European Commission started legal proceedings against the UK government for failing to deal with air pollution, stating that levels of nitrogen dioxide – mainly from diesel engines – were “excessive” in many cities. The gas causes respiratory illness and contributes to early deaths.

It’s not surprising then that Bristol is confronting planning applications for new diesel-powered, inner city power stations – in this case in Lawrence Hill and Lockleaze – along with another new gas-fired plant in the middle of residential St Werburghs. Since the plans came to light, residents in each area have been campaigning against the proposals, encouraging objections to the applications and protesting outside Council meetings.

“It’s just morally wrong,” says Bruce Yates, a local involved in the RADE Bristol (Residents Against Dirty Energy) website, which has seen hit counts of 300-400 everyday since its inception a couple of weeks ago. “Don’t get me wrong, our objection is not to more energy sites, it’s about the right sort of sites in the right place. There are places for diesel sites, but not in the middle of communities. There has to be alternatives. We know there are.”

The sentiment is echoed in the hundreds of objections lodged with the Council against the proposed plans. The main factors quoted in opposition is the effect on air quality – already low in these areas and exacerbated by the proximity of the M32 – noise and ecological impact. The St Werburghs and Lockleaze sites are in residential areas metres from homes, and, in the Lawrence Hill case, the plant will be within a stone’s throw of St Philips Marsh nursery school.

The fact that the areas chosen are among the most deprived in the city has not passed opponents by, with one commentator employing the US concept of “environmental racism” to describe what they describe as the “dumping of dirty, polluting and generally unwelcome facilities on poor, deprived communities”.

“This could impact on the quality of life and well-being of those children.” reads one objection. “…As Bristol is meant to be a Green Capital, it is extraordinary that this dirty energy development is even being considered.”

The scope of the national push towards diesel power is considerable. As reported in the Financial Times, the total proposed new diesel output under current government plans will reach 1.5 gigawatts. If all the current diesel power bids to government are successful, diesel facilities will provide enough power for over 1 million homes. They will also emit several million tons of carbon each year.

Strange, then, that companies like Plutus are keen to paint their operations in green. Their website feeds the line that STOR (Short Term Operating Reserves) facilities go hand in hand with increasing use of renewables – as crucial back-up when the sun stops shining and the wind stops blowing, stating their work “enables the UK to increasingly depend on green energy without the fear of not being able to cope with demand.” UK Power Reserve (UKPR) – who focus on new small scale gas-fired plants – use the same argument for their PR.

Although complimenting renewables is one aspect of STOR facilities, it is one small part of the story. Even Tim Emrich, CEO of UKPR, has admitted that it’s “not the primary focus”. There is a more urgent necessity for STOR facilities to take the load as old fossil fuel generators close down. The requirement for STOR capacity has been calculated by the National Grid to double in the coming decade.

Plutus and UKPR are desperate to be at the forefront of the rush for contracts, taking part in a bonanza of planning applications. UKPR boast in the industry of pursuing an “aggressive” expansion strategy.

Neither Plutus nor UKPR sought public consultation for their Bristol plans. On hearing that they were being called in to a committee by the council – and exceptional measure to allow scrutiny of the plans – Plutus were “furious” said councillor Hibaq Jama at a public meeting. They reportedly demanded a decision on the planning application before the end of the day – which was denied.

The hysterical and anti-democratic reaction is due to the huge sums of money at stake. According to the Financial Times estimate, if companies like Plutus succeed in their bids for providing the National Grid -which looks likely-, diesel facilities will receive around £436 million in tax-funded subsidies.

How does it feel for the residents, knowing that the plans threatening your community are funded by your taxes? “For me the cost is secondary,” says Bruce Yates, “more important is the way the government has slashed the green energy budget in order to fund the capacity market to the value of £970m, and then for these companies that are profiting from us to then target the most vulnerable and poorest areas or our city and exploit loopholes to avoid proper impact assessments.”

Proposal: A “stand-by” power station with natural gas spark fuelled engines. UKPR have submitted two options, one of which details 14 engines, each with a 11.3m high chimneys, the other 10 more powerful engines with 12.6m chimneys.

Running time: Planning applications quote an expected run time of 300 hours per year during the winter months, although there is scope for usage to exceed these averages – a “worst case scenario” estimate is 1500 hours per year.

Status: At the time of writing, the Council is taking the plans to a planning Committee for determination, planned for December 9th 2015.

Running time: The company estimates 200 hours per year, operating intermittently, and not outside the hours 7.30-2300.

Status: At the time of writing, the Council is taking the plans to a planning Committee for determination, planned for December 9th 2015.

But why now, and where is all this money coming from? The answer lies in nationwide energy policy, which has been overhauled. The UK is facing an energy supply “crunch”, as, one by one, the old coal-fired power stations lurch slowly into obsolescence. The government’s preferred successor – an expanded natural gas sector – has failed to proliferate as quickly as hoped, mainly due to low electricity prices discouraging large scale capital investment in new gas plants. Meanwhile, the renewables industries are still struggling after their subsidies were cut.

Facing this uncertainty, the UK government adopted a new strategy last year to ‘keep the lights on’. Known as a Capacity Market (CM) auction, the government auctioned contracts to power providers based on their future availability to provide energy to the grid. The first auction took place last December and auctioned contracts worth £931million for the 2018/19 period. The winners basically receive money for agreeing to exist during this period – the energy they produce will be paid for as normal at the time of use.

This included payments available to companies making ‘back-up’ capacity available – flexible generation and STOR facilities. For the diesel plants, using diesel-fired units that can be bought directly from China and plugged in, the companies have the advantage of low start-up costs. Under the capacity market, STOR providers can now be paid both for being on stand-by, and also for providing energy in the capacity market. Other big winners of the subsidies were big energy producers Drax and EDF, who effectively received multi-million tax-funded subsidies for doing what they already do.

The huge gains for diesel and other fossil fuel solutions were neither desirable nor inevitable. As Professor Catherine Mitchell, at the University of Exeter, has said, the results could be “disastrous” – funding the continuation of dirty coal and gas production well into the future when we should be urgently decarbonising the system.

Beyond Bristol, there are thought to be around 20 similar applications underway up and down the country. Since last year other communities have launched and won opposition campaigns.  This summer, Yeovil and Manchester fought off plans for generator facilities from power company UK Power Reserve (UKPR). One year ago in St Albans, plans for a UKPR gas-fired power plant were eventually withdrawn, with local MP Anne Main criticising the company for submitting “a series of rapid applications” which residents “have not had time to consider”.

Bristol is just the latest battleground resulting from an unpopular and backwards-looking energy strategy. Residents of St Werburghs, Lockleaze and Lawrence Hill draw hope from other towns and cities where plans have been thrown out after concerted community resistance. The next crucial date for Bristol residents, Plutus Energy and UKPR is the Council’s Committee hearing, expected to take place on December 9th.

Art Review: ‘A Drawn out Death’ by Creative Youth Network » 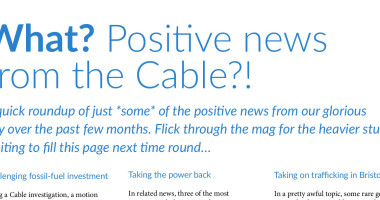 Other Ideas And Action City Edition 6

A quick roundup of just *some* of the positive news from our glorious city over the past few months. Flick through the mag for the heavier stuff waiting to fill this page next time round…