A quick roundup of just *some* of the positive news from our glorious city over the past few months. Flick through the mag for the heavier stuff waiting to fill other pages next time round…

Citing a Cable investigation, a motion was put to the University of Bristol Court to propose divesting the university’s millions from fossil fuels. Unfortunately 71 members voted for continued hypocrisy, against 65 in favour of action. A good start though at least. In an even more positive development, councillors voted for fossil fuel-free pensions at a full council meeting in December. Read about Avon Pension Fund’s £35 million investment in fossil fuels here.

“In a positive development, councillors voted for fossil fuel-free pensions at a full council meeting in December”

Taking the power back

In related news, three of the most controversial planning applications to cross Bristol council’s desk this year have been withdrawn or rejected, in a feat of community organisation. Proposed diesel power plants in St Phillips and Lockleaze were cancelled by energy company Plutus when residents began mobilising against the polluting developments. UK Power Reserve, which was proposing a gas-fired plant in St Werburghs, saw its plans unceremoniously thrown out during a planning committee meeting on 9 December, in front of cheering residents.

Taking on trafficking in Bristol

In a pretty awful topic, some rare good news – leading Bristol human rights lawyers Deighton Pierce Glynn recently succeeded in a groundbreaking legal action. Days before their case was due to go to trial, Bristol City Council agreed to provide support and accommodation for a destitute and street homeless victim of human trafficking, who was at high risk of being re-trafficked if forced to return to their country of origin. The case sets an important precedent that should apply to other local authorities, and provide much needed support for trafficking victims facing destitution or homelessness. See inside for more.

“You think you can take on the landlords?” We just did

Bristol’s community union ACORN has notched up quite a few victories in its short existence. Most of these don’t involve threats of violence by uppity landlords – but sadly not all. An ACORN organiser demanded repairs to a tenant’s leaking roof and was threatened by a landlord saying he would “sort them out personally”. ACORN kept up the pressure and got the repairs done. Maybe that’s what he meant by ‘sorting them out’!

And the crappy employers too…

Withholding wages is unfortunately not a thing of the past. Fortunately however, neither is fighting for rights. The Bristol branch of the Industrial Workers of the World recently succeeded in recovering unpaid wages of a worker from Café Amoré in Broadmead by using both formal channels and direct action.

Join the Cable – Build a new model for media. » 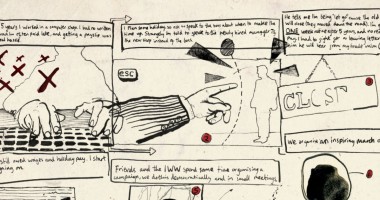 A true story of a Bristolian fighting workplace injustice

For more info on the Bristol IWW see their website.