To what extent do people’s sense of community, perception of influence and opportunity, or access to resources impact the way they voted in the EU referendum?

As the Cable reported last week, the breakdown of Bristol’s EU referendum results by ward illuminated some striking disparities: despite the overall Bristol result favouring ‘remain’, many of the wards around the city’s outskirts voted to leave.

Here we look closely at how each ward voted and compare the results with social and economic factors.

To what extent do people’s sense of community, perception of influence and opportunity, or access to resources impact the way they voted in the referendum?

There is a strong correlation between the extent to which people feel excluded from political power, and the way a ward voted. For example in Redland, one of the areas with the highest remain vote, the number of people who felt that they had influence over political decisions in Bristol was 32%, whereas in Hengrove & Whitchurch, an area with one of the highest leave votes, just 11% of people felt this way.

The difference in quality of education also seemed to relate to how the ward voted. In wards with a high number of people who got 5 A-C GCSEs the remain vote was higher. For example, in Redland 90.6% of pupils attained this standard, whereas in Avonmouth it was just 38.2%.

Any correlation between results and financial resources, or the lack of them, was less obvious. In some cases, financial difficulties seemed linked to the results. For example in Hartcliffe & Withywood, a ward where 22% said they struggled financially, 66.9% voted to leave. In Westbury-on-Trym, one of the most well off parts of Bristol, the leave vote was just 26.8%.

However other wards where many people struggle financially, such as Lawrence Hill and Easton, voted overwhelmingly to remain, showing money isn’t a clear factor one way or another.

Feelings of community and belonging seem to have influenced the way people chose to vote. Amongst leave voters there was generally a lower level of satisfaction with the communities they lived in, a concern that things had gotten worse, and less less hope for the future.

In wards with high numbers of BME and/or non-British White residents, the remain vote tended to be stronger, even if the ward was deprived. For instance, Lawrence Hill is the most deprived ward in the city, and has a BME/Other White population of over 65%, and 71.7% voted to remain in the EU.

In areas which voted to leave the feeling that ‘people of different backgrounds get on well together’ was much lower than in areas which voted to remain. For example, in Bishopsworth just 46% of people felt that this statement was true, even though the area has an overwhelmingly White British population (93.9%).

The results in full:

Full data and sources on these infographics for all wards in the city.

There’s been an invasion of our schools » 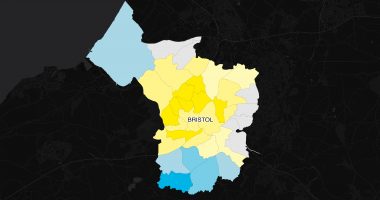 We didn’t all vote Remain…

by Lorna Stephenson and Dean Ayotte on 1st July, 2016

Much of Bristol may be holding onto the idea that we're a Remain city - one of the few to buck the EU referendum trend of shock 'leave' wins. A closer look at the vote breakdown tells a different story...