I was there to watch a play but ended up studying the audience more closely than the cast. Sending us back to the late 1950s and early 60s, the Ronettes’ ‘Be My Baby’ buzzed in the background as we took to our seats. The front row in a packed Avonmouth Community Centre filled with grey-haired veteran Merchant Navy men and women, who bobbed along to the melodies of their youth.

The moving piece of theatre, titled Sailors’ Tales, was put on by Acta Community Theatre. Avonmouth, a port town on the northern outskirts of Bristol, was once home to plenty of dockers and seamen before mass layoffs put an end to a way of life that had long shaped the cultural and economic fabric of towns and villages across the British Isles. The automation of commercial shipping with the introduction of large container ships – as touched on by the play – along with the decimation of trade unions, sank a labour force that for centuries had relied on the flow of international shipping.

The cast performed scenes based on the memories of the men who went out to sea and the women and family who stayed at home. And the audience watched, winked, laughed and nudged each other as they relived bygone times. Here are some of the testimonies gathered by Acta Community Theatre.

“I had a bit of free time on that ship, and we’d play darts, and I’d read a lot. Most of the lads had radios, and most of them fished. I caught a shark once, with a big metal hook on the end of a rope. The shark bit, and I tried to pull it in, but it got away, and you know it had bent that big hook straight.”

“This one trip the cook – always called him Doc – he went mad. I went down to complain and he started shouting about how he hadn’t been at sea for 10 years, and how it was an impossible job, and anyway, he got this big meat cleaver, and he slashed at his arm with it – nearly took his hand off. Well, they had to take him away, he’d lost his mind, what with all the heat and everything. Never saw him again.”

“Avonmouth could have all you would want in those days, all the shops you could want, no need to go anywhere else, such a tight-knit community, if you were in trouble everyone would rally round. In the middle of the night, if you needed help, all you had to do was bang on the wall and your next door neighbour would be round to see what was wrong.”

With thanks to Acta Community Theatre and the Bristol Merchant Seamen’s Association. 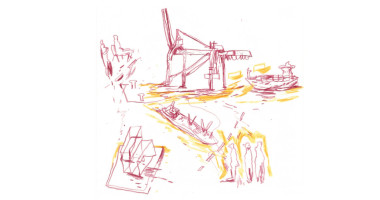 The Long Read: What links Tory donors, a secretive society, mayoral power, a council rebellion, and millions of pounds? Nothing better than the sale of a public asset to kick up a fuss.