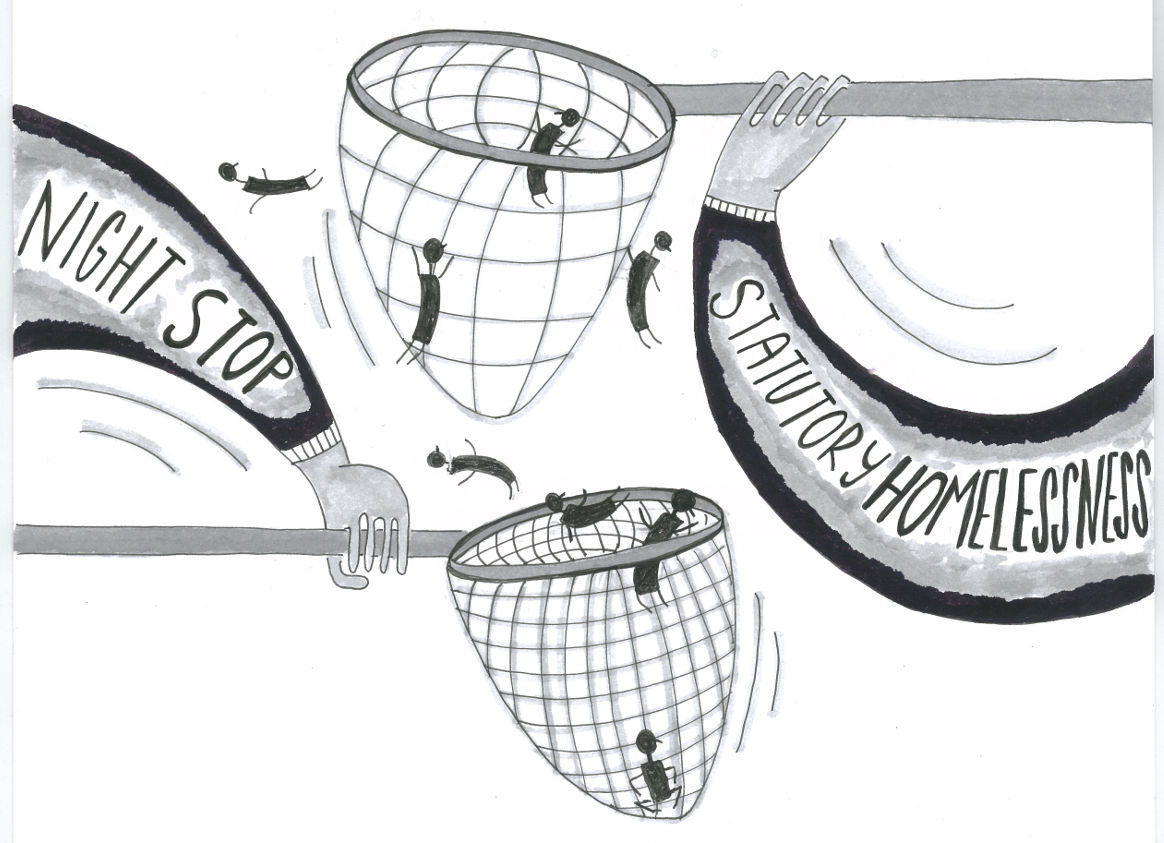 As the housing crisis deepens and homelessness is on the rise, some Bristolians are stepping up to help those falling through the gaps in provision

“Society doesn’t encourage you to open your house to people you don’t know. On the first night, the young person arrived and they were really outgoing. We had prepared two dinners, but they were actually not that picky and we watched SpongeBob SquarePants. I was expecting to be really awake, having someone I didn’t know in the house, but actually I slept better than I usually do. It turned into a sort of family atmosphere very quickly.”

This is Lizzie’s description of her first night as a volunteer host for Bristol Night Stop, a community hosting scheme for homeless young people (aged 18-25), who may not qualify for housing support from the local authority.

In 2013, the charity Caring in Bristol set up the first Night Stop in Bristol, one of 42 in the country. Funded by the Big Lottery, it started with two members of staff and a willing host, and has grown to a network of 25 households. The hosts are vetted then trained and supported by staff to provide shelter, food, a caring environment and a spare room for a night. To date, Bristol Nightstop has arranged 505 bed nights for 139 young people.

The project lead for Night Stop, Tyrell, compares its people-led approach to that of Notting Hill Carnival where, he says, a “community response to race relations gave the community a sense of empowerment and direction”. Lizzie echoes this sentiment by describing Night Stop as an opportunity to “do something that lives up to your values”. She calls it “a pearl in a bad landscape”.

The landscape is bleak indeed. Bristol is facing an increase in all forms of homelessness and now has the highest rough sleeper count in England, outside London. National figures indicate that 52% of those seeking help with homelessness are under 25.

Holes in the net

Tyrell describes how Night Stop fits into Bristol’s housing provision like a “holding bay” to ensure young people aren’t rough sleeping. “It’s not about taking away duty or replicating [other provider’s] work; it’s about finding out where the gaps are,” he says.

So where are the gaps? The statutory or legal definition of homelessness follows a set criteria, and people that fall outside of this may be physically homeless, but not ‘statutorily homeless’. In the period between April and June 2016, there were 29,790 applications for housing assistance in England. Of these applications only 51% were accepted as being ‘owed a main homelessness duty’.

Beth Watts, a researcher at Heriot-Watt University specialising in youth homelessness, explains that the legal safety net for young homeless people is “really full of holes”, with many excluded from support. To be considered homeless by a local authority you need to be in ‘priority need’, have a ‘local connection’, be eligible to claim housing support in the UK, and to not be ‘intentionally homeless’. Single people need to meet a high threshold of ‘vulnerability’ in order to be considered ‘priority need’ (although a 2015 Supreme Court ruling mercifully pointed to lowering the threshold). “Many people who we would consider vulnerable wouldn’t pass the test,” Watts says.

Proving a local connection can also be tricky. One way you can do so is by having lived in an area for six months out of the past 12. Rian, a young person using Night Stop, has already been waiting six months to prove his. He attends college in Bristol but is struggling because, he says, “When you get up you’re thinking, where are you going to sleep tomorrow. Imagine.”

Further challenges to people like Rian are emerging as a result of a policy change on 1 November 2016, changing what counts as ‘living in the area’. Bristol council said, “If a person slept rough in Bristol for six months they would not automatically establish a local connection.” Rough sleeping – on a park bench, in a shop doorway, in a tent in a park or in a night shelter – is no longer deemed ‘residing’, as the council “don’t want to encourage people to sleep rough on the streets”.

Night Stop doesn’t share such criteria, which allows the initiative to support young people regardless of their situation. This is not only through its hosting provision but also through keyworking that offers support to a young person for as long as it takes to place them in a stable housing situation.

But in 2019, Night Stop’s lottery funding is due to run out so what then? Clearly, the need for a provision supporting young people who don’t fit the current statutory homelessness definition will be higher than ever.

Many of the above issues are currently being discussed in parliament. The proposed Homelessness Reduction Bill introduces a new duty or obligation on local authorities to prevent and relieve a person’s homelessness within 56 days, regardless of whether they meet one of the priority categories. According to Watts, “Young people who fall through the existing gaps in this system will benefit from this bill.”

Although the bill has been seen as a potential positive step, concerns have been raised about whether it would be underpinned by the level of resources required to implement it effectively. It also does not address the wider issues of housing shortage and insecurity of the private rented sector – the biggest cause of homelessness. To make matters worse, one of the government cuts set to be introduced in April 2017 will remove entitlement to housing support for most out-of-work 18-21 year olds, which will have a knock-on effect on youth homelessness.

Whatever the outcome of the Homelessness Reduction Bill, the open arms and spare rooms of Bristol’s Night Stop hosts look set to remain in demand.

If you’d like to find out more about Nightstop and becoming a host, check out www.bristolnightstop.org.uk.