The shock announcement of the temporary overnight closure of Weston General Hospital’s emergency department comes in the wake of a graphic Care Quality Commission report, highlighting a department falling apart due to the NHS recruitment crisis and ongoing service pressures.

Attendances to A&E have risen by 5.9% over the last six years and funding for the NHS continues to be cut back.

Following a report from the Care Quality Commission (CQC), Weston General Hospital will, beginning on the 4th July, temporarily close it’s A&E overnight and shift the burden onto Bristol’s already overcrowded hospitals. The extreme pressure on the NHS is beginning to manifest in Bristol, with the first rounds of closures and service reductions outlined in the Sustainability and Transformation Plan hitting frontline services.

The overall CQC rating for the hospital was ‘Requires Improvement’, the same middling rating the trust received in 2015. Although there had been a lot of improvement in the main hospital, with seven out of 10 services rated good or outstanding according to the CQC’s criteria, the report highligted the Emergency Department in particular as ‘Inadequate’ – due to a number of grave concerns around the consistent inability to recruit staff to the Department and the knock on impact this has had on patient care.

The unusually graphic report from the inspector painted a picture of an emergency department struggling to keep its head above water, as attendances to A&E have risen by 5.9% over the last six years and funding for the NHS continues to be cut back.

“The emergency department was consistently failing to meet the national standard requiring 95% of patients to be discharged, admitted or transferred within four hours of arrival.” In the month prior to the CQC inspection, the worst recorded performance was only 51% of patients seen within 4 hours. The day regularly begins with the department already overflowing and then gets worse. Over the four days the CQC inspected the department there were an average of 19 patients waiting for a bed at 8:30am.
“The corridor area was not a suitable or safe environment for patients to receive emergency care and treatment and was not fit for purpose.” The report notes that lighting was poor, so investigations like taking blood were difficult. There are no call bells so if patients need help they need to be capable of shouting for a nurse. Having no oxygen or suction lines, combined with a lack of available plug sockets meant cables for portable equipment stretched across the corridor creating a trip hazard. And because there are no secure lockers patient records were not being securely stored. Staff reported that the corridor was used so regularly that it was ‘the norm’.
“Medical staffing levels and skill mix did not ensure safe care at all times. There was a fragile medical infrastructure with a crucial reliance on locum medical staff.” In particular, after 11pm the emergency department is staffed with only two middle-grade doctors, which ‘medical staff confirmed was a risk’. It was also found that the A&E clinical lead consultant position had been unfilled since 2015, with the report stating medical leadership was ‘frail and in disarray’. There ‘were risks to children’ due to a lack of consultant paediatric cover overnight.

Immediately following the release of the CQC report James Rimmer, Chief Executive of Weston Area Health Trust, announced that the A&E department would temporarily close overnight, beginning in July. Only a week earlier the trust, speaking to the Weston Mercury: “Quashed rumours its accident and emergency (A&E) department will run a reduced overnight service.”

The Emergency Department temporary closure will give the trust ‘time to reset and remodel the department and build a safe staffing model for an overnight service’, so if the trust can hire more doctors then the service will re-open. The trust insists that the department is still safe, although this contradicts several passages of the CQC report and the trust’s own press releases, which say: ‘Is the Is A&E unsafe currently? No.’, but also ‘our A&E department isn’t stable or safe enough in its current form’.

Local campaigners suspect that although the CQC didn’t require the service to close overnight, hospital management ‘leapt at the chance’ to tie the controversial service closure to an external report, as a way to help make a decision that no-one wants to take – but has to be taken to protect patients. This is certainly not a financial decision, in the strange world of NHS finances closing a department like this means the trust loses money and adds to its deficit.

Mr Rimmer said in the press statement: “Our staff have worked incredibly hard to shore-up the department but despite significant efforts we just can’t recruit enough permanent doctors and are very dependent on temporary and locum staff.  This is not an easy decision to make, but patient safety is our number one priority.” The Medical Director, Dr Peter Collins added: “A temporary overnight closure gives us time to work with local GPs, community services, social care colleagues and neighbouring hospitals to strengthen, redesign and rebuild our urgent and emergency care service in North Somerset. It is our ability to recruit that is our challenge, not our ability to care.”

The announcement of the temporary closure came as a surprise, the official decision to close the department was taken over the weekend following the release of the CQC report, but the department had been on the chopping block for far longer. The CQC report notes that a plan to close the department overnight had been in place since at least December 2016. Codenamed ‘Operation Seagull’, it set out what would happen if the trust was unable to find two doctors able to cover the ward overnight and had to close in an emergency. The plan very nearly went into action over the Christmas holidays.

In February the trust and local CCG launched an unofficial consultation (it was called an ‘engagement’) into options for changing the structure of the Emergency Department. And in the first week of June, during the election period, rumours from inside the hospital said that the trust planned to announce the closure in early July, exactly as it has now done, but that the press and members of the public couldn’t yet be informed.

With the comprehensive and detailed plan for how the Bristol, North Somerset and South Gloucestershire health region plans to save £300m over the next five years still unpublished, health activists are seriously concerned about more surprise service reductions and closures.

“There had been little progress in reducing mortality at the trust.” The report notes that 15% of deaths in the hospital were not being reviewed by clinicians to see if mistakes had been made and could be learnt from. When the CQC inspected between the 28th February and 14th March, the last mortality meeting was three months earlier on the 6th December.
“Equipment in the department was not consistently checked to ensure it was available and safe for use.” The inspectors found that some resuscitation kits in the department were not being checked daily so could not be guaranteed to be available in an emergency. Some equipment hadn’t been checked for stretches of up to three weeks.

The impact on health

The closure of the overnight service at Weston means that between 10pm and 8am whatever patients might have been sent to Weston will now be taken by ambulance to either of Bristol’s hospitals or to Taunton. North Bristol Trust is expected to take an extra five patients per night, and University Hospitals Bristol Trust is expected to take 5-11 patients. The most recent performance figures show North Bristol Trust averaging 98.72% of its beds occupied, and University Hospitals Bristol Trust at approximately 99% capacity. Neither trust has met their A&E performance targets since August 2015.

More worrying than the impact on Bristol’s hospitals is the potential harm to the patients from being transported across the county. A scientific study in 2007 found that patients travelling an extra 10km had on average a 1% increase in mortality, and it is 35km from Weston to Bristol. The South Western Ambulance Service are still in discussions with North Somerset CCG on how much extra funding it will receive to cover this extra service with more rotas and more ambulances.

The only good news arising from this episode is that the Department of Health has seen fit to release a tranche of money to the trust. The £842,600 is a one-off capital payment, so won’t really deal with the recurring recruitment problems or re-providing the withdrawn services in the long term. The trust expects to end the 2017/18 with a deficit of £11.8m, after £2.3m efficiency savings.

If you want to chip in to try and protect the NHS, campaigners are planning a demonstration outside Weston General Hospital at 9:00 on the 4th of July, to coincide with the trust board meeting at 10:00. The Weston-Super-Mare Labour Party has also started a petition for you to sign. 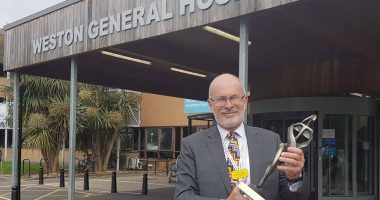 Weston General Hospital has been struggling to keep pace for years, which is why it was such a surprise to see it winning a ‘Top...