Tired of the misrepresentation of refugees and asylum seekers in the media, Bristol Free Voice is tackling the issue head on. Founded earlier this year, the grassroots community journalism project is a platform for people from refugee and asylum seeking communities in Bristol to own and create their media.

Whether talking about the heavy subjects in the refugee community like homelessness and the asylum system, or things that we all share in common like music and cooking, BFV is about letting the people affected tell the story they want to tell that day. You can listen to the project’s first productions here.

The Cable spoke with three of the project’s facilitators: Fatima, Jasmine, and Georgia, as well as Esam, one of its principal founders. (pictured above)

Esam, why did you want to start Bristol Free Voice?

Esam: I found that the media in this country is showing a lot of ugliness of asylum seekers and refugees, which is not true. They affect our situation – we’ve become like a scapegoat. They say that migrants or asylum seekers come here to steal our houses, our jobs, our education, whatever. Some of my friends unfortunately have been harmed. They’ve been attacked, you know, by racist people. My friend from my country, he was killed. And other people from different communities, they’ve been killed because they were asylum seekers, or they were refugees.

I found a real lack of information in the newspapers, the local newspapers and other media. For those reasons I talked with my friends and different communities about this issue, and I thought it should have its own group – our project – to deliver true stories from asylum seekers and refugees. So that people understand how much people have been affected, and how their lives have become difficult, many people are living in limbo, even homeless.

What kinds of issues do you hope to address with Bristol Free Voice?

Fatima: And it’s not a case of ‘this is what BFV want to get from people’ – it’s more the other way around. So what do people want to share? What do people want to talk about? The power to decide is within the people we want to record. So the issues can range from anything as political as, you know, as the housing issues, and concerns people have about the asylum seeking process – or – it can be something as light hearted as talking about their hobby of cooking, it can literally be anything. I think that’s the unique thing about BFV: there isn’t a particular area that we want to focus on, it’s more that, this is a space where you can talk about whatever you want to talk about.

Esam: They want to have a truthful place to say ‘this is a human being’. People are really interested in sharing their life stories, stories of their journeys, whatever is happening to them here in Bristol. People like to talk about their own life experiences in the UK, their journey and why they decided to leave their country or family. We want everybody to feel safe with us. We want to be respectful and not attack anyone. We want to deliver those true stories to people when they listen, to find out – what is the reality?

Is there anything that stands out for you guys from your experience of being involved with BFV?

Georgia: For me, some of the stories that stood out the most were the ones that were most simple, talking about simple objects and senses that reminded them of home and what they were looking for in finding home and yeah they’re really powerful. You should listen to the one with the rose.

Fatima: Yeah it shows how home can literally be anywhere. So whenever you look at a rose, or think of yoga you’ll be like ‘Oh that reminds somebody of their home back in Kurdistan’.

How did BFV decide to begin by focusing on audio and radio?

Fatima: After having our first workshop one of the main things to come out of it were questions of privacy and anonymity. One of the things about the asylum seeking and refugee communities is that because they’re so misrepresented in the media there’s a lot of mistrust, fear and misconceptions about the role of media. People have had bad experiences. And we wanted to focus on, what form of media can ensure that anonymity? And we thought that recording was the best way to do that – to focus on the voice itself by using audio and radio to begin with.

Could you give me an example of something you’re working on?

Jasmine: So at the moment I’m working with a person at Borderlands and we’ve been talking about doing something to do with music so, we haven’t started recording yet, but it’s like the history of Ethiopian music and the origin story of melodies in Ethiopia and then hopefully playing some music as well and kind of making it into a bit of a piece. It’s almost going to be like a podcast and radio show and that will be the first of that kind, but we will probably do more of after that. We’re trying out different things.

Georgia: We did a lot of recordings at the Refugee Festival ‘Celebrating Sanctuary’ event as well. We went around asking the public about how the festival made people feel and why they thought it was important and we’re going to turn that into a podcast.

Esam: At the moment we’re focusing on recording stories from asylum seeking people in Bristol, and had a workshop – a project called The Voice Box – and we shared that in the Refugee Festival.

How do you feel that current media spaces in Bristol cater for people who fall under the classification of refugee or asylum seeker?

Listening to the ‘Voice Box’ at the recent Bristol Refugee Festival

Georgia: Bristol in general has a lot of really great grassroots organisations, like The Bristol Cable and Ujima Radio who are really interested in our project which is good.

Fatima: If it wasn’t for those organisations and the projects that are already happening in Bristol I don’t think BFV could have even spoken to the people that we have. We realised early on actually we need to start working with organisations that already exist and have already built that relationship with the community, and the community trusts these people. Rather than building a whole new relationship with people which would take so much longer, let’s work with already existing projects and organisations and go from there.

How have you personally found being involved in the journey of Bristol Free Voice?

Jasmine: At the moment it’s a small project, we’re hoping for it to grow but we don’t want to say ‘this is the platform’. We’re not saying ‘this is representative’ – it is just literally snippets of conversations with some really amazing people.

Is there anything you’d like to say to potential audiences?

Esam: I want to say thanks to them. I would like to ask anybody if you are interested or you feel you want to help these people who’ve fled from their countries and come here seeking safety, we would like people to listen to our stories. We like people to contact us if they’d like to join us. We welcome anybody.

« Voices: A view on van-living

Bijan Ebrahimi’s nephew: “We all let my uncle down, we must all fight a racist system” » 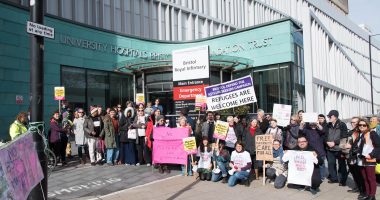 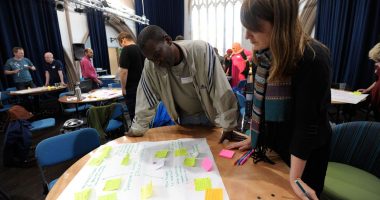 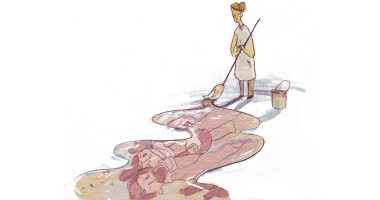 Illustration by: B. Mure (www.bmurecreative.co.uk) “I am called “illegal immigrant”, because my asylum case has been refused. There are many people like me that the...