It came as a shock to many political pundits when the Conservative MP Charlotte Leslie lost her Bristol North West seat to Labour’s Darren Jones in the June elections. Indeed Jones’ election represented the first time since 1974 that the MP for Bristol North West wasn’t of the same party as the one in government.

But hold your horses, Leslie hasn’t exited the world of politics. Far from it, she’s taken up the job of director at the Conservative Middle East Council (CMEC). The organisation says it brings together “Conservative parliamentarians together with leading experts” to “promote the discussion of UK foreign policy in the Middle East to ensure that this policy is grounded in a deep understanding of the complexities of the region.”

So why did former Bristol North West MP Charlotte Leslie land the job? As previously reported by the Cable, Leslie consistently represented the interests of Middle Eastern sheikdoms during her time in Westminster, despite the fact that many are criticised for extensive human rights abuses.

She paid plenty of visits to the region, going on trips aimed at enhancing bilateral cooperation between the House of Saud and the UK, to security summits in Bahrain which involved the luxury of staying at the Ritz-Carlton Hotel. Back in parliament, Leslie defended UK arms sales to Saudi Arabia and told those who criticised the UAE, to stop indulging in “a luxury…of impotent moralising from a far-off position”.

An investigation last year by the Middle East Monitor shed light on the financial backers behind the CMEC. It revealed that the organisation’s funders have strong business interests in Saudi Arabia and other Gulf states, ranging from the defence to the energy sectors.

Funders have included David Rowland, a business tycoon, political financier and Monaco tax exile. Rosemary Said, another funder, is the wife of Syrian-Saudi businessman Wafic Said who is reported to have played a key role as a “fixer” in arranging the controversial Al-Yamamah arms deals between BAE Systems and the Saudi Arabian government.

Leslie’s keen advocacy for Saudi Arabia and other Gulf states during her time in office seems to have paid off, having previously been CMEC’s vice-chair. If Leslie’s lucky, she may even enjoy a spot more than another food hamper, courtesy of the UK embassy of Saudi Arabia!

« The News in Brief: Cuts, and consultations about cuts

Following all expenses paid trips to the Middle East, local MP Charlotte Leslie has developed a newfound support for the United Arab Emirates. Review the... 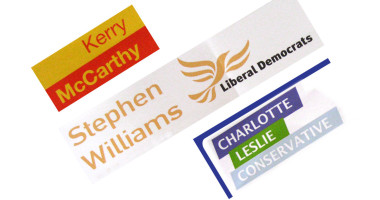