We hear from a Bristolian anti-fascist in the ongoing  fight in Syria.

Tweeting @Sabcharlie, the author is a dedicated hunt saboteur. Also interested in animal rights, anti-fascism, land rights and intersectionality. They also have extremely fluffy cheeks. Currently with the YPG in Raqqa, Syria.

Sat in an old, half-ruined Syrian army base north of Raqqa, the General looked around at us – a dozen foreign volunteers, fresh from the academy and eager to be sent to the front lines – and shook his head. “Why have you come here?” he asked. “Why would you leave peace?” We laughed nervously and avoided his gaze.

My answer, and I suspect everyone else’s, was complicated. I had followed the Syrian civil war from a distance, and had been inspired by the way the Syrian Democratic Forces (SDF¹) had united the many ethnic groups of the area; had replaced the evil of Daesh (ISIS) with a functioning democratic system; and seemed to have a viable model for peace in a region often presented as doomed to endless wars. There seemed to be an oasis of freedom here, surrounded by powerful enemies and unreliable allies, and I couldn’t sit at home and leave the fate of that freedom entirely in the hands of others.

But more than that: I had watched with joy and disbelief the sweeping successes of the Kurdish² women’s movement, both on and off the battlefield. While their militias swept aside an enemy consciously founded on extreme male violence, in the liberated areas they were working towards a free and equal society where women’s rights are guaranteed, by force of arms if necessary³. To me, that represents a hope for a better world, and I want to see this movement, to learn from them, to help them. I need hope, and for that hope I was willing to leave my life behind for eight months, to travel to a war zone, and risk death at the hands of Daesh.

Getting to Northern Syria is tricky at the moment, as its immediate neighbours all hate and fear it. I applied to join the YPG⁴, a mostly-Kurdish militia who helped found the SDF, and they were able to smuggle me across the border with a group of volunteers⁵. Those returning for the second or third time were assigned units and sent to the front. The remaining dozen of us were sent to the International Academy for a month-long course in Kurdish, local history and politics, and some basic military training.

A few weeks before our arrival, Turkish jets had bombed a nearby YPG media centre, with huge loss of life. The Turkish government fears that the success of Kurdish militias in Syria, and the society they’ve created, will inspire further resistance in the area of Kurdistan that Turkey occupies⁶. Our whole area was on alert for a couple of months, and several times we had to leave the academy and hide in fields as planes went overhead. As I lay in a ditch one day listening to the distant rumble of jet engines, one of the US veterans I was with turned to the other and asked, “Is this what it’s like to be on the other side?”

“Man,” the other replied, “we were assholes.”

In Raqqa, the airstrikes7 support us. With most, though not all of the civilians gone from the city, and with Daesh’s ranks severely depleted and demoralized, most of the fighting has been long-range. Daesh shells us, attempts to pick us off with snipers, or sends drones to drop grenades on us. We try to work out where the attacks are coming from, check there aren’t civilians nearby, and call in airstrikes. Some evenings I lie in bed listening to the booms and whistles of rival mortar batteries shelling each other, counting the thuds as each barrage launches so I can tell who’s winning. Those of us at the front push forward one building at a time, checking for mines and tunnels, and trying to trap Daesh in an area small enough for them to actually defend.

Even at close quarters, this remains an artillery battle. My unit was once sent to clear a building on the front line where Daesh had been spotted. Taking cover in the doorway of an apartment block across the street, we decided to call in an airstrike rather than risk an assault. Daesh, glaring out at us, decided to call in a car bomb rather than risk leaving cover. Someone else, presumably operating a surveillance drone, spotted the car bomb moving and called in another airstrike. All three arrived at the building opposite us pretty much simultaneously, leveling it and leaving us stunned and covered in concrete dust.

Life here can be hard, boring, occasionally even dangerous, but coming here is one of the best decisions I ever made. The civilians filtering back into the liberated areas, or waiting in the camps outside the city, are always overjoyed to see us. They bring us food when they have it, or share our rations when they don’t. Children play in the street while their mothers, in brightly-colored traditional clothes, watch over them. Soon the Raqqa Civilian Council will move in and set up neighbourhood assemblies, who will elect people to oversee the reconstruction of the city. The locals will set up a self-defence militia and security forces, schools will open for all genders, and the long task of rebuilding society will begin.

The freedom here, after so much oppression, is incredible to see, and I’m so proud to be part of making that possible.

1) The SDF is a multi-ethnic and multi-religious alliance of dozens of large and small groups formed to fight ISIS.

2) Kurdistan is a geographic region stretching across parts of Iraq, Syria, Iran and Turkey, in which Kurdish people form the prominent majority population. Different Kurdish groups have campaigned variously for greater autonomy, an independent state, and more radical forms of democracy.

3) The YPJ or Women’s Protection Unit are an estimated 24,000 strong female miltia. The YPJ have played a central role in the frontline fight against ISIS including the liberation of thousands of ISIS held Yazidis on Mount Sinjar. Women also occupy officer positions in the male dominated YPG militia.

4) An estimated 400 people from all over the world have joined the armed wings of the Democratic Union Party (PYD): the People’s Protection Units (YPG) and Women’s Protections Units (YPJ). The volunteers are predominantly left-wing and anarchist activists who support the PYD’s stated aims for a society based on gender equality, ecological balance and radical democracy. The volunteers also include numerous Army veterans including from the UK and USA.

5) The influx of foreign volunteers has been described as the modern day equivalent of the International Brigades that saw hundreds of people travel to Spain to join communist and anarchist forces in the fight against the Franco’s fascist dictatorship. A plaque in Castle Park memorialises the deaths of four Bristolians who were killed in Spain.

6)There has been a long running political and armed conflict, dating back a century or more, between Kurds living in Turkey and the Turkish government.

7)There has been a long running political and armed conflict, dating back a century or more, between Kurds living in Turkey and the Turkish government.”

« Watch: Together we can fight modern slavery 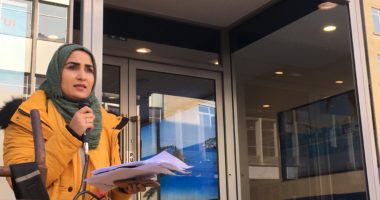 Bristol And Beyond Voices