The controversial plans could have eroded the working conditions of NHS staff, from cleaners to porters and catering workers.

North Bristol NHS Trust (NBT) has backed down on plans to transfer management of staff to a private company, after pressure from trade unions and campaigners.

The trust had commissioned a feasibility report into setting up an arms-length management company to manage facilities staff, such as cleaners, porters, catering and maintenance workers.

Unions were concerned that this would in effect represent the privatisation of these services, as staff would no longer work for the NHS directly and could see worsened pay and working conditions.

For example, new staff could have faced being paid the minimum wage, inferior sick pay conditions and missing out on the NHS pension scheme.

“Workers rights must be protected, as should the status of the NHS as a public institution”

However, the trust’s board has scrapped these proposals after vocal opposition from local campaigners and trade union representatives, who slammed the plans as “disgraceful and scandalous” at a public board meeting held on 1 February.

A statement from the trust to staff said: “At its meeting on 1 February the Trust Board considered the next steps in relation to a subsidiary company. We have taken the decision not to pursue this at the current time.

“The board agreed no action will be taken in the foreseeable future, at least [for the] next financial year 2018/2019. If we do look again it will depend on the circumstances at that time,” it continued.

A victory against creeping NHS privatisation

A spokesperson from the joint unions, GMB, UNISON and Unite, at Southmead Hospital said: “This is a real moral victory for the staff at North Bristol NHS Trust, who have been clear in their opposition to the scheme.

“The Joint Unions offer our sincere and grateful thanks to all of the organisations and individuals who have helped us in this campaign. It would seem that we all do have a voice and we can make it heard when we work together,” they added.

Bristol North West MP Darren Jones told the Cable: “I am pleased to hear that North Bristol NHS Trust has reconsidered their plans to transfer some employees to a separate, private employment company.

“Workers rights must be protected, as should the status of the NHS as a public institution.”

Jones has previously criticised NHS privatisation after the collapse of construction giant Carillion, the company who built Southmead Hospital under the private finance initiative (PFI). The local MP called for the ongoing work by Carillion at the hospital to be taken back into public hands.

Mike Campbell from campaign group Protect Our NHS, who campaigned against the plans, described the news as “a victory, not just for common sense, but one that recognises and respects the rights of all NHS workers”.

“I welcome NBT Board’s sensible decision, which shows how campaigns where patients, staff, trade unions work together can win significant victories in defending the NHS against creeping privatisation,“ he told the Cable.

There have been examples of a decline in the standards for NHS workers employed by private contractors in other parts of the country, including in London where cleaners and porters went on strike over pay in 2017.

The staff that would have been affected in Bristol work long hours, are among the lowest paid in the NHS and often come from the most socially deprived areas of Bristol, including a significant number from BME backgrounds, union reps say.

« Gasheads are taking action against hunger in Bristol

by Matthew Hollinshead on 23rd November, 2018 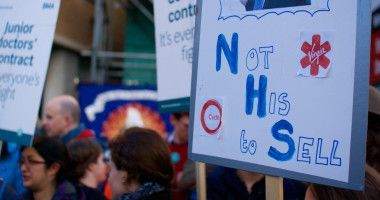