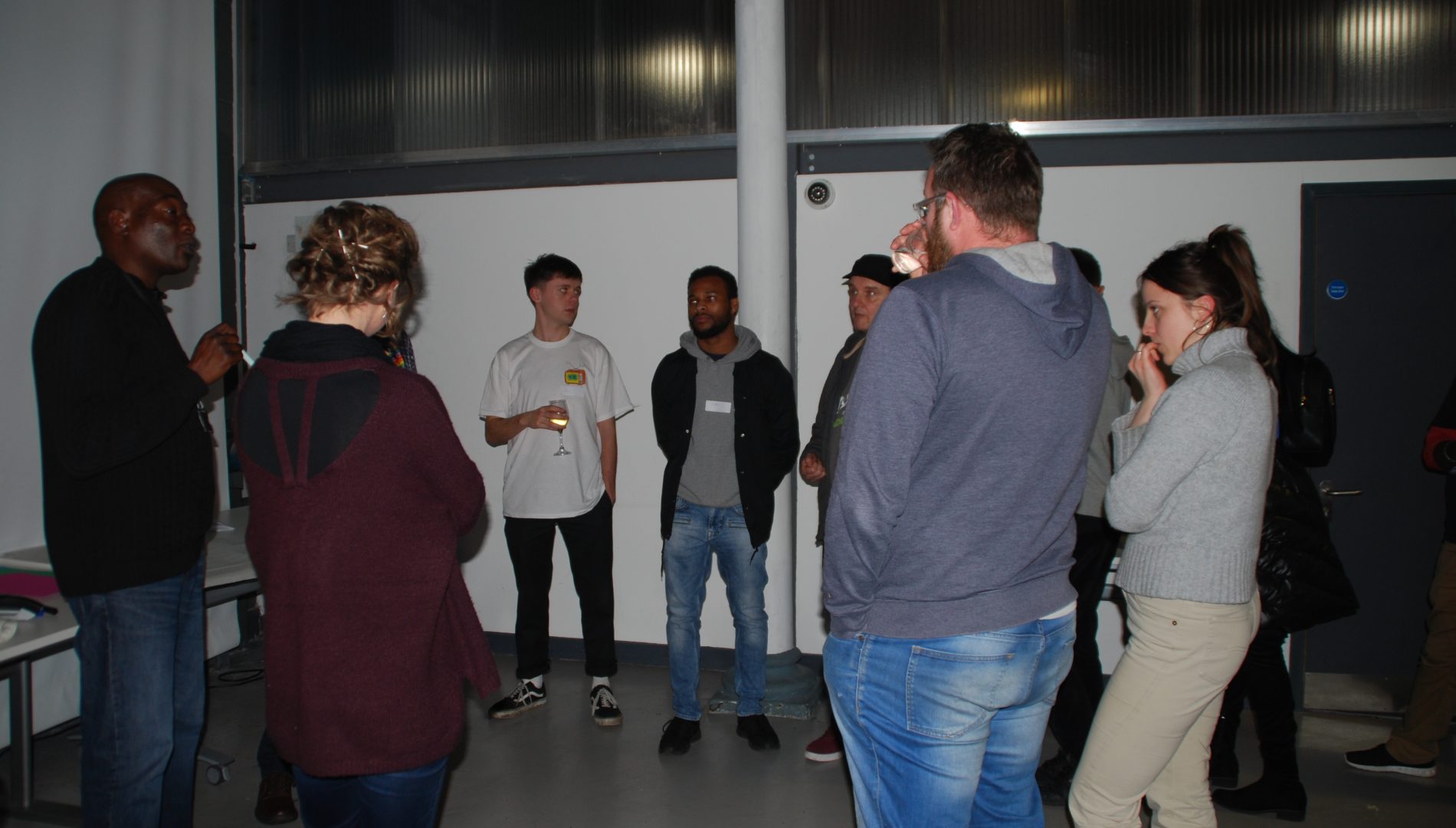 The event brought together a range of professionals and students to discuss structural barriers – including racism, classism, sexism, and homophobia – which prevent people who want to get into the media from doing so. Those same barriers make some people think that the media isn’t even a viable career opportunity for them.

Representatives from BcFM, Noods, Ujima, Up Our Street, Bristol 24/7, Bristol Cable’s Media Lab, and many more brainstormed solutions. Just by looking at the attendees, it was clear how many innovative and important initiatives Bristol has that involve people who don’t fit the ‘straight, able-bodied, white, middle-class, cis-man’ box. Plenty of these groups are dotted around: this event was about joining them up.

Delroy Hibbert, Cable director and event host, introduced the two speakers, Miranda Rae and Dr Shawn Sobers who spoke about their unconventional routes into media careers – and how they hope more people from atypical backgrounds can make it the sector.

First up was Miranda Rae: TV and radio presenter for BBC 4, newspaper columnist, and club DJ, among other roles. Miranda’s early career was in promotions and PR for FTP Radio in Bristol. From there she went on to become the UK’s first woman to be a full- time radio presenter – shocking, considering this was in the mid-90s!

She went on to become head of specialist programming, and then to have an award winning show on BBC R5. Coming back from maternity leave in 2012, and now facing not only sexism, but the ageism levied at any woman who dares to reach 40, she was unsure what to do. The answer was Ujima radio, where Miranda has a weekly show, and the Sound Women mentoring scheme, which aimed to help women working in radio to advance their careers. The national scheme disbanded in 2016 due to lack of funding, but a south west network remains, which Miranda coordinates.

Second up: Dr Shawn Sobers. Shawn is associate professor of Lens Media at the University of the West of England (UWE), a filmmaker, photographer, and writer and co-founder or Firstborn Creatives, a production company that has made shows for BBC, ITV West, and Channel 4.

A career in academia is something Shawn says he never expected for himself: he left school after GCSEs to work in factories where racism was rife. He then got involved with Bristol’s Black Pyramid Films, which led to a stint as a programme director at HTV (now ITV West and Wales), leading to invitations to teach university students. Eventually, he studied at SOAS, London, and completed his PhD at UWE.

Shawn’s message was that people should accept opportunities even if they think, at first, they can’t do them: Say yes now, think about how to do it later. Shawn also emphasised the value of having access to creative communities in finding opportunities.

Inspired and ready to chat, attendees then joined breakout sessions: thinking up some ways to start tackling the problem – some preliminary actions on which the network can focus its efforts. Distilling the huge amount discussed into a short article is near impossible, but main calls to action are:

If you have an idea, go for it!
Gary Thompson, founder of Cables and Cameras, a regular night at The Cube showcasing films made by black, Asian and minority ethnic filmmakers, started his night simply because there wasn’t one on offer like it. He didn’t wait until he was sure he knew exactly how to do it: he just did it. And it’s allowed people to come together face to face, share stories and advice, and find out about filmmaking opportunities.
Established groups should publicise training and opportunities
BCFM and Ujima representatives both said they are open to mentoring people and letting people sit with them to learn how radio works. Shawn pointed out that UWE has resources – rooms and policies to support community initiatives. The Bristol Cable runs journalism training and events for free or hugely subsidised rates. Established groups need to be clear and spread the message about what they are willing to offer. And those wanting to set up something new or break into the media shouldn’t assume that they won’t help. At the same time, access to mentoring and apprenticeships at bigger beasts like the BBC need to be improved.
Engaging young people
Anyone with a foot in the door needs to work to let young people through that door too, especially to show children in Bristol’s less affluent areas that media is an option for them. Resources like the BME powerlist can help identify inspiring speakers. As former youth workers in attendance attested, trying to improve and inspire confidence in young people is difficult given that society has ingrained in them the idea that media as a career, and cultural spaces like Watershed and Arnolfini, are not for them. Building up engagement with these children requires patience – which can’t be achieved through one-off events.


So we’ve had this meeting – what’s next? The most important outcome was the beginnings of a network of Bristol organisations and individuals willing to work together on the shared goal of widening access to media opportunities in the city. Watch this space for updates from the new network!

If you want to be involved in this network get in touch at info@thebristolcable.org