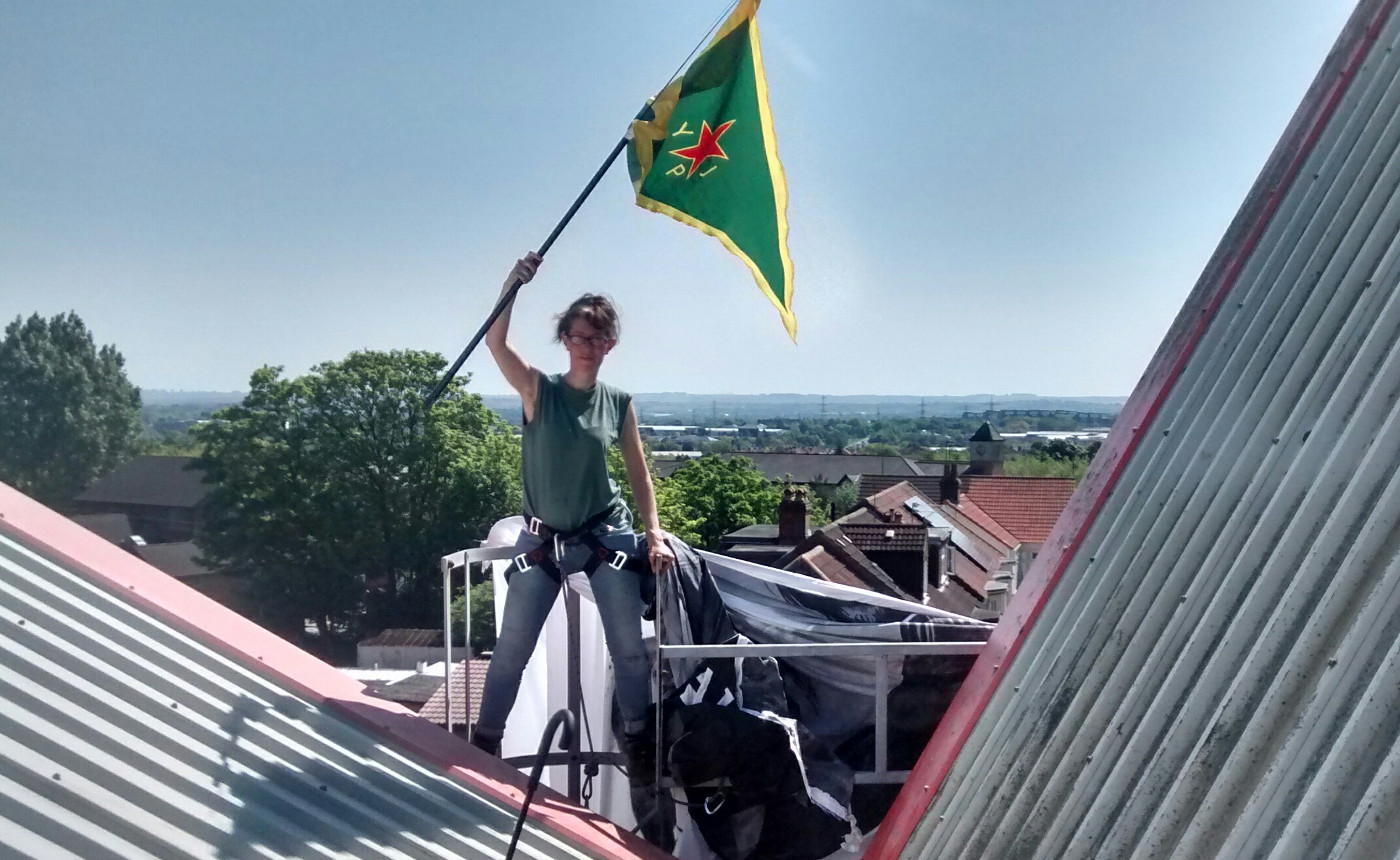 By Anonymous on 15th May, 2018
BRISTOL AND BEYOND | VOICES: arms, kurds, syria
Copy Link

When someone dies, you are left with the things you talked about doing together, but never got round to. This protest was one of those things.

Our friend Anna Campbell was killed by a Turkish airstrike in March this year, while fighting with Kurdish YPJ forces in Kurdish-occupied, northern Syria, a region known as Rojava.

There is rarely any mention in news reports about Syria of the role the Rojavan forces have played in the battle against ISIS, but they’ve had unparalleled success in reclaiming territory.

I was one of a group of friends who talked with Anna years ago about protesting the arms trade: which roof would be best, whose portraits we could use. We wanted to show that the casualties from the Bristol arms industry aren’t faceless. That they were people with favourite snacks and running jokes and nieces who would ask why they hadn’t come home. Death is always personal, but reports of far away wars rarely are.

Two months on from her death, it feels pretty personal up here. It is her sidelong glance on the wall. Her story we’re telling.

Anna died protecting civilians fleeing the Turkish invasion of the city of Afrin, along with two other women from her unit. They were as brave and important as Anna, but they happen to have been Kurdish, so you won’t have heard their names. They were Serhildan and Sara Merdîn. We know that Anna would have wanted us to show their faces too, but we don’t have the photos of them because of the difficulties being experienced by the YPJ forces remaining in Afrin.

So instead we will tell the stories two other YPJ fighters killed in combat, to represent the remarkable heroism of the women who’ve been fighting for freedom in one of the world’s harshest war zones. Barîn was 23 years old. She joined the YPJ in 2015 to fight against ISIS, and participated in the battle to liberate Raqqa. She was in one of the units deployed to help defend Afrin from invasion by its neighbour Turkey. The area was acting as a vital refuge for people from all parts of the Syrian conflict and had been under peaceful control of the Rojavan democratic self-administration for some years. Barîn died in late January 2018 trying to protect these civilians from Turkish mercenaries in the village of Qunde.

There have been widespread reports that Turkey has been employing former ISIS and Al-Qaeda fighters on their border territories, with all the atrocities this will inevitable entail. Either way, there is graphic evidence in Barîn’s case that the soldiers who killed her hated women. They filmed themselves with her mutilated body and proudly posted the footage on social media.

The Kurdish Red Crescent reported on 27 February that at least 348 civilians had died in the conflict to that point. Those who could escape, did. On 15 March the Syrian Observatory for Human Rights said that more than 30,000 people had fled the city in 24 hours.

Yet there has been no British investigations into war crimes. Arms exports licences are still in place. Airbus, the company whose roof we’re sitting on, has a contract to make wings for 10 multi-purpose aircraft for the Turkish military. It’s already sent four sets over. Arîn Mîrkan is one the greatest fighters against fascism you’ve never heard of.

There is rarely any mention in news reports about Syria of the role the Rojavan forces have played in the battle against ISIS, but they’ve had unparalleled success in reclaiming territory. This has been recognised by the US forces who’ve been working with the YPJ and YPG.

Back in In October 2014, it looked like the Syrian war was turning ISIS’s way. ISIS were besieging the town of Kobane in northern Syria/Rojava. Arîn, a young Kurdish woman born in Afrin, was a unit commander in the Women’s Defense Units (YPJ). She and a comrade were being advanced on by ISIS fighters with tanks and weaponry stolen from the Syrian army. Her comrades were being closed in on by jihadists at the strategically critical Mishtenur Hill, but they were on foot and only had guns. So she crawled under a tank, and pulled the pin on the grenade she was carrying, killing herself, and the surrounding soldiers. Her friends escaped, and the Rojavan forces later captured the position.

Her sacrifice and the military advantage it secured is now widely regarded to have been the turning point in the battle. A victory which changed the fortunes of the resistance, and saw them go on to win region after region back from ISIS.

Arîn’s last words were, “I have to do this for my people…”. Some remarkable tributes have emerged since Anna’s death, so we we won’t try to add to them, but instead say a little of what we think Anna might have say if she were here today:

She’d have been glad we were telling the stories of remarkable women.
She’d have made some blunt comments about the UK visit today of Turkish president, Erdoğan.

She would have told us not to pander to the reductionist tendencies of the mainstream press, who are often afraid to report the complexity of interlinked issues, and instructed us to point out that today is also the Nakba, the 70th anniversary of the day Palestinians were evicted from their homes. After all, Palestinians also regularly die during attacks using British weapons.

She would have pottered in the garden in the sunshine, made an amazing dinner and been angry and joyful.

She would have told us not to give up. 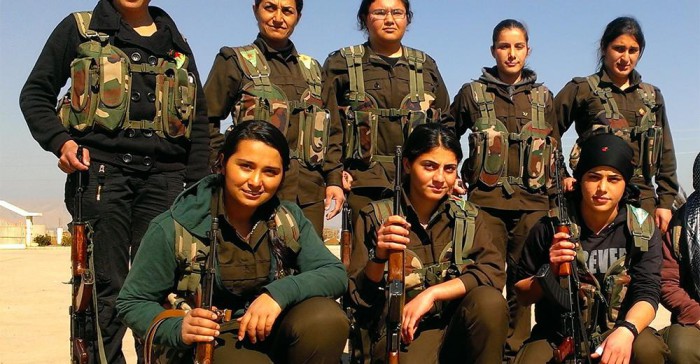 “This year due to political uncertainty back home and threats to our people by ISIS we decided to suspend the party as a way of... 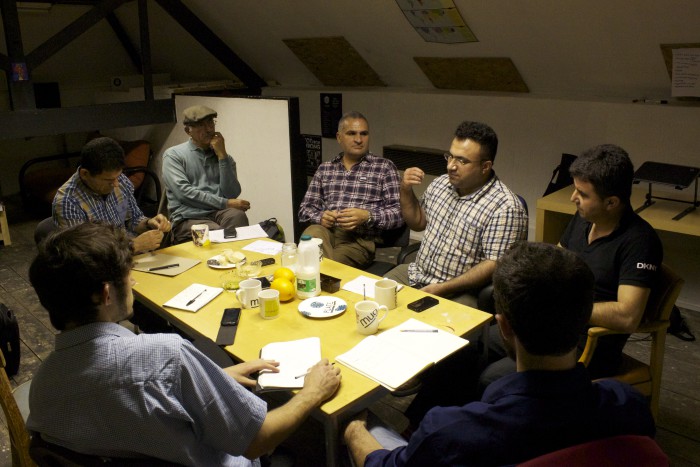 “We are not allowed a state on the ground, so we create one online.”

The Bristol Cable caught up with 5 Bristolian Kurds to chat about Islamic State, Kurdish communal life, and exile.