A South Bristol resident spared eviction yesterday after an action from community union ACORN has told the Cable that being switched onto the government’s controversial new universal credit benefit worsened her debt situation.

Jenny*, from Hartcliffe, was given a stay of execution from homelessness as bailiffs working for Bristol council drove off on seeing a large group of ACORN members outside her home.

Universal credit is currently being rolled out across Bristol, with some people already facing problems.

The action was the first time the union, which has made a name in Bristol and elsewhere defending private rented tenants’ rights, has stopped an eviction from a council property.

It remained unclear whether the resistance would help the mother-of-two negotiate a chance to keep a council tenancy, or just give her a few more days to find somewhere to stay and store her belongings. 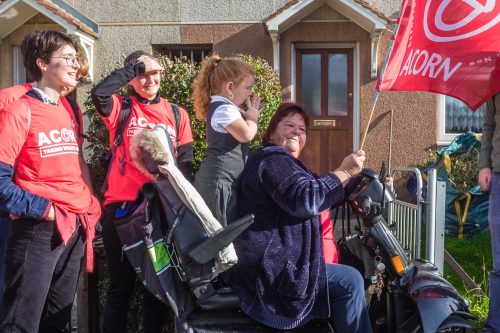 Jenny said the thousands of pounds of arrears on her three-bed home of 16 years, which until recently she shared with two adult daughters, originated from a housing benefit overpayment, which the council had clawed back.

“I was borrowing off my mum, off everyone, just to eat – even my neighbours were giving me food”

A letter from a council advice officer seen by the Cable added that she had previously struggled with keeping up claims due to ongoing issues in her life, increasing her housing debt. But it said she was “engaging well” with several south Bristol support agencies and was trying to pay off what she owed.

Jenny said a zero-hours contract job, which messed up her benefit payments because of irregular wages, followed by the switch onto universal credit, had sent her situation further off the rails over the past year.

A system beset by problems and controversy

Universal credit, which combines six of the most common so-called legacy benefits, including housing benefit, into a single monthly payment, must be managed via an online portal, the ‘journal’, rather than letters and phone calls. So-called full-service universal credit has been coming into force in Bristol since June; claimants must wait five weeks for their first payment.

Earlier this month, universal credit’s national rollout was again slowed due to fears over the hardship it has been causing many people – some of which have been echoed both by claimants and advice workers here in Bristol.

“I know she has been trying to sort her situation out while living on nothing, and that universal credit has made that worse”

“I tried to do it online, on a friend’s phone, thought I’d done it right but was waiting two months for any money – then it turned out I’d done it wrong, only I didn’t know,” Jenny said. Her first attempt at claiming led to a fruitless eight-week wait for money.

“I was borrowing off my mum, off everyone, just to eat – even my neighbours were giving me food,” she says.

After contacting the job centre, Jenny made a second, successful claim for the new benefit with the help of her daughter, which included getting an advance payment to see her through.

But once deductions for the advance payment, her rent and her other arrears came out of her monthly universal credit payment, she was left with too little to eat and pay her bills. Under the new system, a greater proportion of a claimant’s money can be taken out at source to service debts than was the case with legacy benefits.When her arrears case came before a judge this week, he decided there were insufficient funds to cover extra outgoings requested by the council and granted an immediate possession order, Jenny said.

“When I rang my debt advisor and said I’ve got to get out she was shocked, because I’d been doing everything [to comply with paying my debts],” added Jenny, who said she’s also offered to give up her family home so she could move into a smaller, cheaper property.

“I’m not allowed to downsize because of my arrears, but I can’t physically stay because don’t get enough to pay the extra bit of rent money,” she said.

ACORN organiser Anny Cullum said she hoped the eviction resistance would “buy [Jenny] a bit more time – she has no idea at the moment where she is going”.

Cullum added: “I know she has been trying to sort her situation out while living on nothing, and that universal credit has made that worse.”

Earlier this year, ACORN had talks with housing associations and the council about the possibility of committing to not evict tenants who fall into arrears due to universal credit. But nothing formal was agreed, in part because landlords were concerned about having their hands tied in similar situations to Jenny’s, where a tenant has already run up significant debt before universal credit then exacerbates the situation.

This week in Bristol: The latest after deadly fire at Twinnell House

Talking to the Cable last month, Bristol City Council’s cabinet member for finance Craig Cheney said there had been no spike in arrears since the start of full-service universal credit. But with thousands of people being pushed into arrears elsewhere in the UK and 5,000 council tenants expected to be using the new benefit to be covering their rent by March 2019, he admitted he was concerned.

Cheney added: “Anything that cuts money from hardest-up is dangerous – I understand the concept of simplifying the system, but people will miss out because they are unsure what they qualify for [under the new regime].”

Hartcliffe councillor Paul Goggin, who has been instrumental alongside the Cable in forcing the council to review it’s use if bailiffs for council tax debts, visited Jenny’s house for her scheduled eviction. Goggin said he hoped an agreement could be reached enabling her to move to a smaller home, and vowed to work with council officers to try to resolve her case.

“If we end up [making people homeless] and putting them in temporary accommodation that costs a fortune – and if we are deemed not to have a duty of care what is the alternative? The streets,” he said. “This isn’t someone who has trashed her house or is refusing to engage, it is someone who has got to a stage in life where she’s sorting things out.”

*not her real name