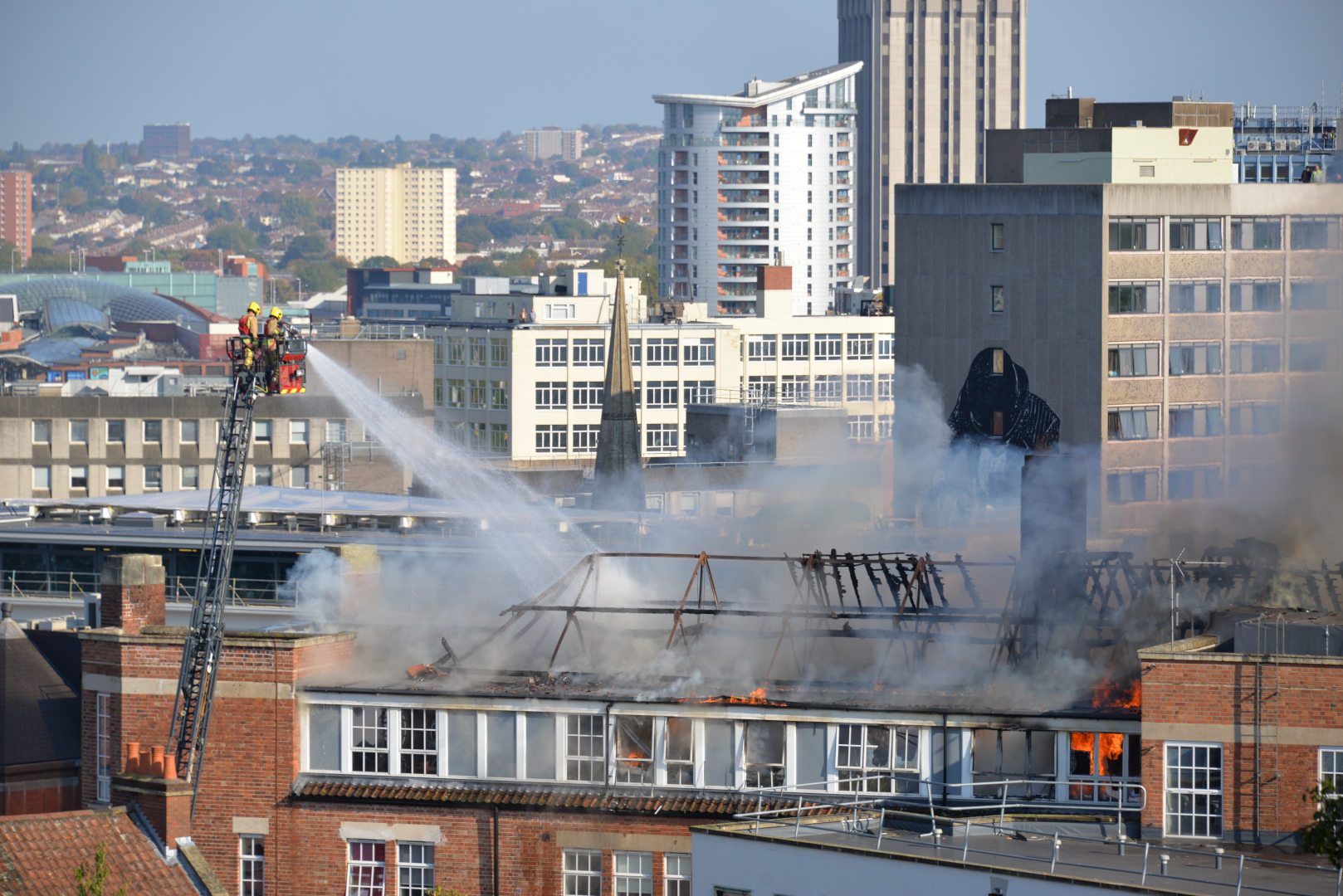 The day before I met Gary Spindler and Brent Thorley, huge plumes of smoke were visible across Bristol after an oil tank caught fire at a Dundry scrapyard. Avon Fire and Rescue Service (AFRS) called on support from Devon and Somerset to tackle the blaze. Forty fire-fighters, a mix of full-time and retained, managed to put it out within four hours.

Major incidents like these make the men, both fire-fighters and Fire Brigade Union (FBU) regional secretaries, nervous. “If another incident of that nature happened at the same time we’d be really, really short of the resources needed to tackle it. You can’t be in two places at once,” says Thorley.

AFRS is at a tipping point. Rounds of austerity measures since 2010 have seen the service lose 200 out of 680 fire-fighter posts, with three fire station closures. More cuts are expected in the new year.

Nationwide, aggressive funding cuts – of 30% in AFRS’s case – coupled with continued deregulation and changing duties placed on fire-fighters, are seriously affecting the fire service’s ability to do its job.

“We’re still a true emergency service, but we’re losing the ability to respond to any emergency at any time,” says Spindler. “But they say – you’re saving less lives now, so we need less of you. So, response time goes up, number of fire-fighters goes down, someone could die.”

We now have the slowest response times in 20 years

The FBU, in a recent document about the cuts, argues that the model being used to justify cuts is not only wrong but a ‘deliberate failure to recognise the role of risk in fire cover’. The government, it says, is using supply and demand principles to steer policy.

Yate fire station is no longer run round the clock based on reasoning that fewer fires equal less need for fire-fighters. Fire engines and specialist appliances sit empty and unmanned in stations across the region.

The impact that cuts are having are now being seen. Recent figures from the government show that, across the country, we now have the slowest response times in 20 years and with it fire deaths last year were up by 10% (excluding Grenfell).

In Spindler’s opinion this demonstrates a blatant disregard for public safety. “With the continued attack on public sector workers by the Tory government, I can only come to that conclusion,” he says.

The FBU is putting up a fight. Celebrating its centenary this year and with 85% of the fire service full union members, the high and engaged membership has a long history of campaigning.

A recent victory in Cheshire saw the FBU put a halt to plans to downgrade cover at two stations. Another campaign in the West Midlands, currently in the courts, has seen the union challenge proposed changes to employment contracts and is looking set for success.

Spindler and Thorley both joined the fire service in their early twenties and are still passionate about the job and proud to wear the uniform. According to Spindler, the FBU is “just trying to provide best service while stuck in a political game of tennis”. It’s the union’s job to improve working conditions for its members and to ensure the safety of the public.

The average response time to fires that risk harming people and property in the Avon Fire and Rescue Service area increased by 44 seconds to 9 minutes and 14 seconds between 2012 and 2017.

It’s a substantial increase. Research conducted by engineering consultancy, Entec, has shown that five minutes after ignition, a fire will begin to grow at exponential rates. By the time a fire has been burning for eight to nine minutes every further minute will see a huge increase on fatalities and fire damage.

However, even this doesn’t paint a full picture as these official response times only record the first fire brigade asset to arrive at the incident. Due to cuts and changes to crewing arrangements, many fire engines will carry less than a full crew of five, meaning they then have to wait for additional fire fighters to arrive on the scene. Effective response times will likely be a lot longer but are not officially recorded.

A bonfire of red tape and public safety

Safety is a real concern. Before fire-fighters can begin fighting a fire there needs to be a certain number of crew on the site, depending on levels of risk. Generally a minimum of five is needed to enter the building where there is a saveable life – a problem when fire engines no longer have the once standard five crew members on board. The wait for the additional fire-fighters to arrive on the scene leads to longer response times, potentially putting them in dangerous situations and risking their lives and those of the public.

Local fire authorities are tasked with recording those response times. Since 2012 figures have only shown the time taken for the first response vehicle to arrive at the scene, regardless that it may be another five or 10 minutes before the next one arrives and they can get to work. “I was at the meeting where they said they were going to take away recording of the second response vehicle – it just smacks of trying to hide something,” says Spindler.

Spindler, who now works for the FBU full-time, is fighting for the recording of accurate statistics. “The politicians should be accountable. Let the public know what they’re getting or not getting,” he says.

The two men talk almost fondly of the days when they’d encounter nervous building owners on fire safety visits. Enforcing building regulations used to be a key part of the role, with the power to close down premises if they didn’t comply. In 2005 the power to issue fire certificates was scrapped and replaced with self-certification, with the onus falling on the building owner or ‘responsible person’ to develop a risk assessment. Compliance to fire safety practices is now only scrutinised in the case of an incident. With this also came the removal of national standards and response models, making the fire service more fragmented and increasing the likelihood of tragedies such as Grenfell Tower.

Despite on-going calls from the FBU, lessons learned from previous fires in tower blocks didn’t make their way into legislation.

Deregulation has been high on the agenda of every government since the 1980s, with the 2010-15 coalition with horrible prescience boasting of delivering a “bonfire of regulations”. Spindler exudes frustration as he describes the refusal of the government to act on fire safety warnings. The fire service needs regulation, regardless of the impact that might have on short-term costs.

Thorley describes the disaster in West London last June as being more like a fire you’d expect in a developing nation. While it was the tower’s flammable cladding that caused the fire’s horrifically fast spread, during the year leading up to the tragedy both residents and inspectors had raised concerns around safety issues such as fire doors (some of which failed), exposed gas pipes and fire-fighters’ lift controls.

Another concern is that, to plug the gap left by a ravaged ambulance service, fire-fighters are now being asked to provide emergency medical response. Spindler can see the value in providing that initial treatment but, he points out, it’ll never be able to replace the specialist skills of paramedics. He talks about incidents now where they’re told no ambulance is available. Nationwide ambulance response times to the most serious emergencies haven’t been met since 2015, with the South West service taking almost three minutes longer than the required response time to reach life-threatening emergencies.

With an eye on improving that situation, the FBU is now back firmly in the Labour Party’s corner after spending 11 years away from the fold starting in 2004, because of a dispute over pay and conditions with the Blair government.

General secretary Matt Wrack said in 2015 that he was encouraged by the party’s change of direction under Jeremy Corbyn. The party’s 2017 election manifesto promised reinvestment in the public sector, including a commitment to recruit at least 3,000 frontline fire-fighters.

Both Spindler and Thorley say they have canvassed locally on Labour’s behalf. “Today’s cuts affect everyone – it all feels a lot more real,” Thorley says.

AFRS has only recently started recruiting after an eight-year freeze, which pushed up the average age of a fire-fighter to 46. Gary and Brent are feeling hopeful this will begin to revitalise the service.

When I ask Spindler if he’d be pleased if his children want to follow in his footsteps and become fire-fighters, I’m expecting a resounding “no” – but in fact I get the opposite response.

The two fire-fighters reckon that with more cuts looming and no sign as yet that the government is learning from the lessons even Grenfell Tower taught them, a change in power seems likely. That renewed hope brings a call to action.

“We’re on our toes for a general election coming soon; things are not going right for the Tories. Their united front is crumbling and with it opens up new possibilities for change,” says Spindler.

594 people rescued from fires and other emergencies

Traveller kids are being "pushed out" says teacher

We talk to the Traveller teacher who’s watching her service disappear.