In the familiar surroundings of Cafe Kino ‘Fat Paul’ Horlick and I meet to discuss his part in saving The Exchange, by turning it into Bristol’s first ever community owned music venue.

The ‘DIY’ club on Old Market is not the only music venue currently under threat in Bristol. On the way from the Bearpit, I pass Lakota and Blue Mountain on Stokes Croft; the former has announced it will be closing in the next few years, the latter the Cable revealed has been bought by developers of student accommodation who are registered in the tax haven of Luxembourg.

Keep going and you get to the Canteen – one of the few survivors following the saga over the future of Hamilton House. Just like Westmoreland House, whose demolition began on November 21st, the whole of Stokes Croft is undergoing a complete transformation. For better or worse, depending on your perspective.

“When I was living here, the area was still a nightmare, marred with poverty, drug dealing, noise, insecurity,” says Paul, who first moved to the area 33 years ago, in a building facing Café Kino. “It has changed… and is continuously changing.”

Share tweet Forward Copy Link Copy Link
With change comes opportunity, too. The team behind the Exchange, who used to own the Croft here in Stokes Croft have a solution that might inspire others in the fight to defend nightlife.

In October, they launched a campaign to become a Community Benefit Society, a set up where everyone gets one share in the enterprise regardless of whether they put in £250 or £25,000. In this way all shareholders equally own the society and can have a say in how it’s run.

This is similar in many ways to the Bristol Cable’s model, whose members contribute a minimum of £1 a month to own a part of the co-op and steer its direction.

“I cannot claim to own anything of the Exchange now,” says Paul

So why did the Exchange team decide to take this route? “We had experienced some difficulties with the council, in every way,” laments Paul. “I was working with Matt Otridge and Pete, and we were literally working all the time for free! We couldn’t afford to give ourselves any wages; we started running the venue out of passion only. We opened the Exchange six years ago in 2012, but it was never easy. But as we also needed the help of other people, we were aware of the fact that it was unfair for them…”

So something needed to change. Raising money, not from venture capitalists, but gig-goers and locals was the solution they came upon.

By the time the community share offer ended on 31 October the 400 shareholders, mainly locals and fans of the venue, including a generous donation from the Fleece’s owner Chris Sharp, had raised an investment of £300,000. The new arrangement means that in January 2019, the Exchange will become Bristol’s first community owned venue.

The funds will allow them to make significant changes to the venue. Just as important to their future success will be a new ethos, or as the team declared after the completion of the campaign “the enthusiasm and ideas that our new co-owners will bring”.

Since 2012, the venue has been open almost every night, for gigs or charity events. But now the 400-something group will be able to bring in new ideas for events and musicians to perform. From January 2019, the leading team will launch improvement work,and a rebuilding of the stage, but want to keep it organic in the spirit of their newly formed co-op.

For the love of Bristol music

Music fan and drummer, Fat Paul is also known for his talent as a DJ. His sets are remembered for their lists of pagan folk music, from Tibetan monks to ritual themes, crossed with punk music.

Paul has also launched independent labels to give new artists a platform and free them from the regular commercial pressures.

The most successful has been Invada, created with Geoff Barrow, founding member of Portishead. Invada released all the albums for Dope and Barrow’s own band, BEAK> which he launched with Billy Fuller and Matt Williams in 2008. Paul is completely uncomfortable with the success. Invada is a label that is now “too big and selling too much”, he says.

To produce even more underground music, he launched the label Environmental Studies here in Bristol, which “doesn’t have to sell”, giving the artists no boundaries to their creativity. Documentary filmmaker Katie Bauer, who directed a film on Paul Horlick this year (named Dead Man’s Money), released her album Post via Environmental Studies.

2019 is going to be a busy year for Fat Paul, and the new owners of the Exchange too, as they struggle to keep up the good work in trying times.

“I cannot claim to own anything of the Exchange now,” says Paul, who still works seven days a week to run the venue. “We now vote all the important decisions together, of course not every detail every day or even every week, and we’re putting into place a new team of managers. We want the Exchange to continue as it is, really.” 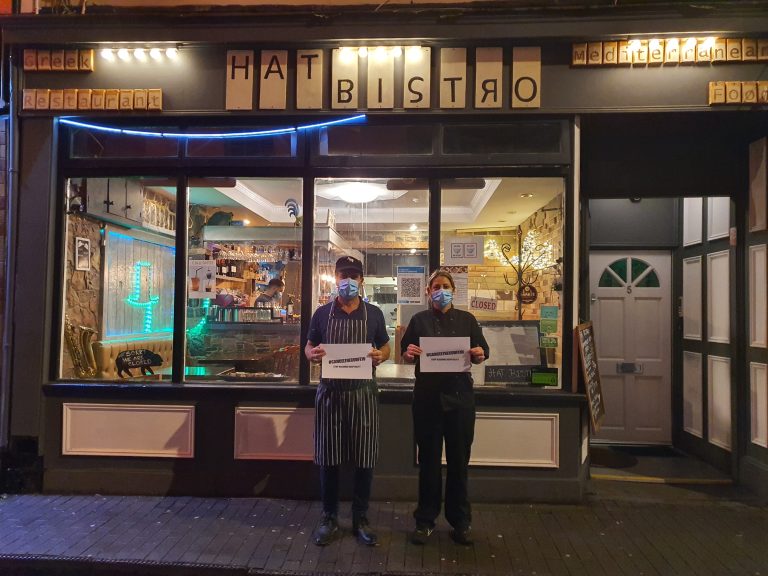