Interview: From addiction to action

One woman’s journey from Bristol’s streets to helping other women ditch the drink.

Alcohol was leading Patsy Staddon to one place only — an early grave. At the height of her addiction, she was living in an abandoned building, begging for money and was injured so often that Bristol Hospital Accident and Emergency began to feel like home.

“The biggest thing women said during my research was how much they needed a women-only space; they did not want to talk about extremely delicate issues with men present.”

However, the kindness of two women achieved something that mainstream treatment never could for Patsy — rehabilitation. The non-judgemental, non-shaming support of these relative strangers set her on a journey that has resulted in thousands of women with alcohol issues being helped ever since.

“If I had continued drinking how I was, I would be dead now,” said Patsy, director of Bristol not-for-profit Women’s Independent Alcohol Support (WIAS). “Those two women revolutionised my life.”

WIAS was born out of research in Bristol that Patsy, now 74, carried as part of her PhD, which was awarded in 2009. WIAS is now a not-for-profit organisation that runs support groups, a helpline, one-to-one counselling, drop-in sessions, and more, to help women with alcohol issues.

The first question many people ask is: why only focus on women? According to Patsy, drunkenness in women is largely perceived as shameful and showing a lack of self-respect and concern for one’s family. As such, women are far more reluctant to ‘come out’ about their alcohol use and seek help for problems.

“Because of the greater shame in our society for a woman who is seen to be drunk — with connotations of looking stupid, neglecting children, and so on — she is more likely to feel shame and guilt,” Patsy explained from her home near St Andrew’s Park. “There is also the reasons why she started drinking. You would be horrified to hear the percentage of domestic and sexual abuse in women who develop alcohol and other drug problems. It is very high.”

When Patsy was researching into women and alcohol at Bristol and Plymouth Universities as part of her PhD, she held many support and research groups with women affected by alcohol issues. She found that the large, mixed-sex groups common among mainstream rehabilitation services were intimidating and counterproductive for many women — and often had the opposite effect.

Refer a friend
Grow free media
Get free stuff
find out how>>
“The biggest thing women said during my research was how much they needed a women-only space; they did not want to talk about extremely delicate issues with men present. They wanted small, female-only groups or one-to-one counselling. We based the WIAS approach on those findings and have found consistently that it works. If we can get women to six sessions, they are very likely to confront their issues and make a big step towards recovery,” said Patsy.

Patsy’s own relationship with alcohol began aged 16. As a “shy and unattractive” teenager, she found that drinking gave her confidence. Aged 18, she began studying Birmingham University. Midway through her studies, Patsy fell pregnant to her long-term boyfriend and they married a short time later.

“Soon after we had two children,” Patsy continued. “Money was really tight, so I started working part-time. However, having my own income also meant that I was able to drink more often. Friends and family were beginning to express concern and this made me angry. I loved alcohol because with it I felt more able to be myself as I am a very anxious and tense person.

“In addition, I was beginning to question my sexuality. I did not feel right in the ‘heterosexual wife and mother’ box. I wanted to have adventures, do exciting things. Alcohol made me believe for a while that this was possible.”

Unable to reduce or stop her drinking, the family split up. “I drifted about the country; living in a variety of places and with a variety of people,” Patsy recalled. “At the age of 44 I ended up living in an abandoned building and begging for money. That was rock bottom. I had 13 admissions to A&E in my final year of drinking due to falls and fights. I would also get attacked.”

Share Tweet Forward
During her frequent trips to Accident and Emergency, Patsy met George, a musician who worked as a porter in the Bristol hospital. After Patsy was discharged, George and her friend came to visit her at home and were so horrified at the destitution that they insisted she came to live with them.

“They gave up their only living room for me,” Patsy recalled. “As well as accepting where I was at with the alcohol, they helped me by taking me to things that I would never have gone to alone and supporting me,” explained Patsy.  “This included discussion groups, political talks, lesbian clubs, and so on. As I got to meet people and listen to things, my brain started coming back and I began to drink less.”

On November 16, 1988, something clicked. Despite feeling thoroughly sick with alcohol withdrawal, Patsy did not borrow money for alcohol. George and her friend took it in turns to stay with Patsy throughout those dark days and she has not drank since. “Had it not been for those two, I would be dead,” said Patsy. “Definitely.”

While Patsy did engage with mainstream treatments services, her own experiences mirrored that of the women she later spoke to whilst researching her PhD. Crucially, it was the non-judgemental and non-shaming support of other women that helped her. “There are many roads to recovery and all we can do is offer what kindness we can, remembering always that shame is the enemy of recovery and that everyone’s road to recovery will be different,” Patsy said.

« Cable event: Undercover in the alt-right

Photos: Voices from behind the counter » 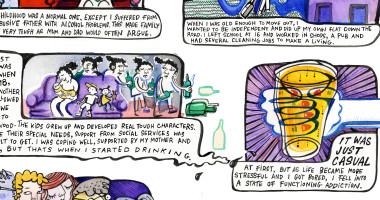