By Lorna Stephenson and Matty Edwards on 1st May, 2019
EDITION 19: development
Copy Link

At the heart of St Philip’s Marsh is the nursery school – an island of activity surrounded by car showrooms, vehicle hires and scrap yards. It’s pick-up time, as trucks and lorries whizz past. Opposite lies a vast concrete site left empty after truck hire company Gullivers’ went bust – one of many businesses in the Marsh to close in recent years.

“We’ve got no voice at all. Our voices are not being heard.”

The nursery itself is the last building remaining from the community that called the Marsh home until the council demolished hundreds of low-quality houses in the 1960s. The residents were dispersed around the city.

“There’s weeds coming through. It’s almost dystopian. When you walk from Temple Meads, round the corner and it’s wasteland. It’s a desert,” says the nursery’s headteacher, Simon Holmes.

But St Philip’s Marsh is about to undergo the next significant transformation in its history. In the council’s plans for strategic development of key city sites – the Local Plan –  the Marsh is earmarked for development of housing and businesses.

Next to the ‘Temple Quarter Enterprise Zone’, in which plans for new apartment blocks and student flats are already in progress, locals near to the Marsh believe it to be a crucial window of opportunity to ensure the development benefits them, and not just developers.

Given the proposals already coming in, such as a highly controversial gas power station that is due to be decided by the council on May 14th, some feel they’re running out of time to have a say in the regeneration – and that the council isn’t listening.

Holmes is one of them. In the playground, he gestures behind the fence where the proposed gas power station would be.

Many children who attend the nursery come from nearby areas such as Barton Hill, where many families live in severe overcrowding.

“When you have so much overcrowding in housing, people living in temporary rented accommodation, people living in caravans on Meriton St [where the nursery is], here’s an opportunity to build housing that families can live in that is affordable and in the city centre. It’s bringing community back to the area,” he says.

“An undesirable thing would be to leave it for it to slowly decay. If it’s just lots of developers thinking about making lots of money, so building luxury flats or housing to sell off for the highest price, it would be awful. You’d need the infrastructure to support the population. If it’s all student accommodation, that wouldn’t be good.”

These different visions for the area are why he believes people need to speak up. “Here’s an opportunity for people to have a say in how this area is developed, not just watching it happen around us.”

Trying to make this happen are a loose coalition of concerned locals, mainly from Barton Hill and Lawrence Hill, organising under the name Marsh Makers.

The group was set up to counteract a feeling of voicelessness within the local communities, who feel, in Holmes’ words, that there is an “invisible wall” between them and the local authority.

“It’s such an opportunity to do something different and special”

At a meeting at Barton Hill Settlement, one participant is Saada, a mother of four who lives in Barton Hill and is keen to stress the importance of regeneration that helps the lower income and Somali community that she belongs to.

“We are overcrowded already,” she says. “There’s loads of houses been built where we had green spaces before.” As well as much needed affordable housing, she says the area needs leisure centres, sport centres, and other resources for young people. She started a popular girls’ cooking club two years ago, but for the boys, she says there’s “zero” to do. Parents “have a lot of fear” of their sons ending up “on the streets”.

Another woman at the meeting is Samsam, who lives with her family in Barton Hill and works at Cashmore nursery there. “My neighbour has nine children, and she has two bedrooms… This is 2019!”

Join the Cable
She feels the communities in the area are segregated –  Somali, British, Polish – and should come together to have more of a say about their future. “I’ve always lived in BS5. The council don’t listen to us… The community must come together, then we’ll have a voice.”

In March, the council released its most recent version of the Local Plan for consultation. It sets out a vision for 33,500 new homes in Bristol by 2036. The plans for St Philips Marsh are to build a mix of housing, including affordable, while maintaining 3,500 jobs and improving transport infrastructure and flood defences.

But someone who is sceptical about Bristol’s housing market and the council’s ability to do something about it is Tom Thorne, 37, resident of the Marsh for nearly a decade. We chat to him and his wife Kat in their living room as their four-year-old daughter plays – she too went to St Philip’s Marsh Nursery School.

“There’s not enough people down here to make the case against any development,” he says. “[The council] will give it the sheen of paying attention, but I’m pretty sure they know what they’re going to do regardless, because there are bigger influences than the concerns of people living nearby – like money.”

Before they bought their house, a rare sight on the Marsh in a little row next to a small industrial trade park, they lived on a boat to escape renting in Bristol’s “exploitative” housing market.

He wants to see homes built that are affordable for families rather than high rise blocks looming over the area, which is already happening. From nearby Sparke Evans Park, you can see an “enormous” new block of flats just completed by Paintworks on Bath Road.

“I just don’t like the idea of flats. High density living – surely it’s been proven that it doesn’t work in many cases. It’s not about making a community or having family homes, it’s about selling units,” he says.

They live near where the Marsh connects to Temple Meads – the site of the Temple Quarter, where Bristol University is going to build a £300 million campus, which Tom worries might be a “catalyst” for student flats being built. “The worst thing would be tonnes of student apartments.”

Just down the road, an application for a 21-storey block for 760 students was made in September, but was rejected by the council because the site is still protected as an industrial area. This would change under the new Local Plan after 2020.

The area also lacks basic infrastructure, Tom says, such as litter bins, parking, decent transport and road crossings. His wife Kat says: “Around here, all the schools are already oversubscribed. The doctors, too. If they are going to develop around here, they really need to put some infrastructure in.”

Share tweet Forward Copy Link Copy Link
Despite the general sense of decline and decay, there’s a sign of life – one which represents another possible direction for the area. Tucked away in a muddy former scrapyard is the site of Meriton Foundry, which hopes to become a hub for small businesses and light industry.

We meet Edwin Fletcher in the site office, next to a warehouse under construction and a yoga studio. He says the vision is to create affordable, creative workspaces and a community of small businesses. The project will be finished in about a year, and will house 90 startups.

“It’s the forgotten part of Bristol,” he says. “The whole of Bristol is moving this way. We’re next on the list, you can see the building work literally moving across. I think we’ve come at the perfect time.”

“It would be a terrible shame to have housing here,” he adds. “You’ve got this employment land. It could be a centre for light industrial businesses – people producing things, creative people, artsy people rather than switching to residential, that would be a shame.”

This vision for area is a far cry from people like Saada and Samsam living in cramped housing in Barton Hill, or families like the Thornes calling for family homes and better basic infrastructure.

Simon Holmes wants to rekindle the sense of community that was lost back in the 1960s. “At the moment, Bristol doesn’t feel like a very integrated city. The school is a microcosm of the different communities. People mix together here… If you expand what is happening at the school, you’d have a really mixed, integrated community.”

“It’s such an opportunity to do something different and special. That needs proper planning and consultation.”

This article differs to the version featured in the Bristol Cable print edition Spring 2019 to include the announcement of the date that the gas power station will be decided by a council planning committee.

Revealed: Evidence of racial profiling of thousands of British citizens by Home Office » 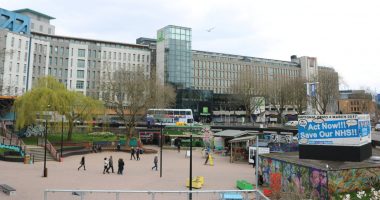