It was in Herefordshire’s picturesque Eastnor Castle that I discovered, in a musty box of loose papers, a political memoir typed after World War Two by Lady Apsley, Bristol’s first female MP.

For a history professor, searching for evidence relating to Lady Apsley’s fascist sympathies – and how they squared with her wartime work as head of the women’s section of the British Legion, and her later endorsement as an MP by Churchill – it was a thrilling find.

But my Eureka moment was ruined when I noticed that chapters of the memoir, about the years leading up to the war, when the appeasement movement was at its height, had been mysteriously removed. Their absence provided one more obstacle to establishing a clear picture of a fascinating, contradictory woman who has become a forgotten footnote in Bristol’s history.

Lady Apsley (1895-1966) served the city for only two years, after her husband who had previously held the seat was killed in an air crash in Malta in 1942. She won Bristol Central for the Conservatives in 1943 but, dismissed as a Tory loyalist widow with no distinctive views of her own, she’s been portrayed as a political lightweight.

Nonetheless, some of what she stood for now sounds oddly familiar. Apsley was part of the ‘submerged tradition’ of radical right-wing Conservatism, and harboured imperialist, racist and antisemitic views along with a hatred of Bolshevism.

But she was no fan of free-market capitalism and fought for the preservation of natural heritage in Britain, subjects that engage many progressives today. And her insistence on the importance of women’s roles as housewives and mothers, and on the need for fathers to help socialise their children, raised questions we are all still grappling with.

I first became intrigued by Lady Apsley when working on Women and the City: Bristol 1373-2000 – a book chronicling largely untold stories about Bristol women’s working and public lives in Bristol.

I suspected there might be more to her than the dismissive verdict delivered by history suggested. But there was little available evidence to challenge it. Even the wonderful exhibition on 100 years of women in Parliament held at Portcullis House in 2018 said little about Lady Apsley.

Born into the landed gentry as Violet Meeking, she, like many women of her class, served as a nurse and ambulance driver during the First World War. She broke away from Edwardian conventions to become a passionate sportswoman, equestrian and later a qualified pilot.

In 1924, she and her new husband Allen Bathurst (soon to become Lord Apsley, and then a parliamentary private secretary) posed as poor English emigrants in the Australian outback in order to brief the government about conditions in resettlement camps.

The memoir of their adventure (written by her, though under both their names) is an engaging read. You can’t help but admire their courage and willingness to endure hardship, or fail to note their genuine empathy for poor English workers. But her unabashed celebration of British imperialism, her racist portrayal of indigenous Australians and her not-so-coded contempt for Jews also feature throughout.

On their return to England, in 1925, Violet Bathurst indefatigably supported her husband’s budding parliamentary career. But tragedy struck their privileged existence in 1930 when Lady Apsley (as she was by then) was permanently disabled after a hunting accident that left her unable to walk and in constant pain.

Servants and a supportive husband undoubtedly eased her plight, but you can’t deny her dignified stoicism and her Herculean efforts to keep active in both her private and public life. When in 1943, she made her maiden speech to the Commons from her wheelchair and defied convention by making a passionate appeal for the better treatment of disabled people, she was met with cheers.

One of only 38 women MPs (out of a total of 615), she didn’t have the star qualities of a Mary Astor or an Eleanor Rathbone. Still, Apsley took her parliamentary duties seriously.

Piecing together her contributions from Hansard and press accounts, I was surprised to find how many other questions she raised in the House and to how many debates she contributed. She lobbied hard for better provision for disabled veterans and for the right of single women in the armed services to get training and keep their jobs after the war.

Lady Apsley saw women ﬁrst and foremost as wives and mothers. Concerned to preserve the principle that fathers headed families, she was eventually persuaded to support Rathbone’s insistence that family allowances be paid to mothers only on the grounds of practical convenience.

Yet her eloquent insistence that the housewife was the “bedrock of the nation” anticipated 1960s and 70s radical feminist arguments that women are essentially different from men, and that their particular contributions to society must be valued. Apsley also showed a prescient, albeit hunting-derived, concern about the need to protect green spaces in rural England – and lobbied for what we would call sustainable agricultural policies, including around composting and recycling waste.

I was almost beginning to warm to Apsley, in fact, when I was stopped in my tracks after finding in The Times a Bristol man in 1936 accusing her of being an apologist for Germany’s Nazi regime.

My efforts to investigate this via her private papers were initially fruitless, with her grandson’s wife telling me that her mother-in-law had burned them. So I began trawling other collections – including private archives at Eastnor Castle, the residence of James Hervey-Bathurst, the grandson of Lady Apsley’s sister. At the time of writing, many of the papers were in the process of being catalogued by archivists.

While the memoir I found was incomplete, some letters revealing her political views and social networks survived. These along with newspaper accounts of her public pronouncements and activities led me to conclude that Lord and Lady Apsley had more than a passing sympathy with Mussolini and Hitler.

They, like many people, had been appalled by the carnage and waste of World War One. Appeasement felt reasonable to a wide range of people on both left and right.

But like many British aviators they were also courted by the Nazis (her husband attended the 1936 Nuremberg rally – as Hitler’s guest). Of her visit to a Nazi-run labour camp for unemployed Germans that year, Lady Apsley spoke admiringly of the “Nordic blond gods” residing there, whom she maintained had a better work ethic than their working-class British counterparts.

Many of the British elite saw fascism as less harmful to their interests than Stalinism. But Lady Apsley and her husband appeared on platforms with overtly fascist speakers, and were organising pro-appeasement talks in Bristol as late as April 1939, well after Kristallnacht (the 1938 pogrom against Jews in Germany) and the German invasion of Czechoslovakia in 1939.

True, she later became a stalwart of British resistance to the Nazis. And certainly her administrative genius as head of the women’s section of the British Legion made an important, if undervalued, contribution to the war effort.

But opposition to Hitler and Mussolini only came after war was declared and bombs started falling. I was struck by how much the Apsleys and their friends cared about preserving hierarchy and property, and how little they minded about the virulent antisemitism and authoritarian repression underpinning fascism.

Swept from power in the 1945 Labour landslide, Lady Apsley became an embittered and increasingly reactionary figure, opposing the NHS and other aspects of the welfare state. Her formal political career ended in the 1950s.

But her life was a contradictory mix of the appalling and the admirable. Her diehard values, especially her racism, antisemitism and hostility to liberal rationalism, coexisted with a love of heritage, place and family values, anticipating views that have resurfaced in the wake of nationalism and political division today.

« Another year in building a new media. Here’s to many more. We need it!

40 years ago, the far right in Bristol was faced down with music, pickets and ballots » 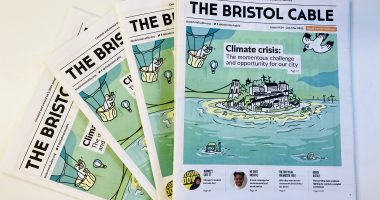 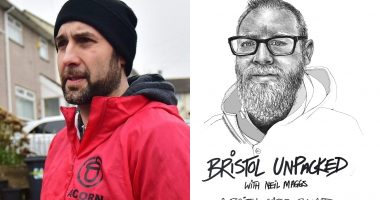