By Alon Aviram on 1st April, 2020
CORONAVIRUS IN BRISTOL | SCRUTINISING INSTITUTIONS: university of bristol, workers rights
Copy Link
Laid-off casual and temporary workers are calling on the University of Bristol to retain them on government Job Retention Programme

The University of Bristol [UoB] has dismissed 84 staff on temporary and short-term contracts, but laid-off staff are now calling on the university to apply for the Government Furlough Scheme to avoid unnecessary unemployment.

Unveiled by Chancellor Rishi Sunak after major political pressure, the Coronavirus Job Retention Programme, aka the Furlough Scheme, enables employers to claim a grant covering 80% of the wages of a furloughed worker – up to £2,500 a month. This means workers can go on temporary leave without risking pay for three months. The government is understood to be contemplating extending the period if necessary.

Employers nationwide have struggled to make sense of government guidelines, leaving employees who could be eligible for support instead facing the sack. A Bristol University spokesperson told the Cable: “Where we can show as a result of COVID-19 we have had to lay staff off because the work no longer exists we hope to be able to apply for the furlough scheme.  Universities have a complex set of arrangements and we require clarification from government about our eligibility to furlough individuals.”

“We’ll respond as positively as we’re able once we have confirmation from the government and HMRC. In the meantime, we’re looking [sic] for other employment opportunities across the organisation.”

A lack of clarity isn’t the only teething issue: workers must have been on their employer’s payroll on or before 28 February 2020, leaving thousands of staff nationwide without pay.

As well as full and part-time staff being covered by the scheme, government guidance clearly states that employees on temporary, flexible and zero hour contracts are also eligible for funding, including those at public institutions.

Helen Rockliff is one UoB worker to have had her contract ended early because of coronavirus. She started maintenance work at the Maths department in November 2019 on a temporary, zero-hour contract, which was due to end on 30 April. “They [UoB Temporary Staffing Service] gave assurance that they would pay until the end of the contract,” she said.

“That was about two or three weeks ago, and then about a week later, management told me they were so sorry but they’ve retracted that and said they are only going to pay until 9 April.”

Rockliff contacted the university asking to be enrolled in the furlough scheme. “As far as I can see, it is applicable”, Rockliff said. “When I queried them about why they decided not to use it, they responded by saying that they could terminate my contract in a week and that the government guidelines weren’t very clear. I assume they just thought that’s the easiest course of action.”

Ashley Scott has worked at UoB since 2016 as a receptionist and administrator for different schools through the Temporary Staffing Service. “My contract came to its end just as the lockdown came into place” Scott said. “It had been rolled over in the past, but that wasn’t to be because of coronavirus. I’m now having to apply for universal credit and that’s proving to be really difficult. I feel like I’m stuck in limbo.”

In internal emails seen by the Cable, the Temporary Staffing Service Manager explains to staff:

“The government is providing mixed messages as to whether we use the Job Retention Scheme for staff engaged in research or education as these are publicly funded activities.”

“As a worker, your assignments are of a temporary nature, which can be ended earlier than anticipated by giving you one week’s [sic] notice. In the circumstances, we have made the difficult decision to review all of our temporary arrangements.”

Meanwhile, in a separate email to university faculties, Deputy Vice-Chancellor Guy Orpen celebrated UoB’s efforts in the battle against coronavirus: “We can all be proud of the contribution the University community is making to the local, national and global effort; as a leadership team, we will continue to ask what more the University can and should be doing.”

The university’s scientific, technological and medical contributions are certainly not to be sniffed at. But beyond cutting-edge innovations, sacked staff wonder if the university could provide something a little more straightforward: job security. “I was wondering about sending them an email saying I’m trying to get you to extend your care for the community to your own staff!” wrote one former employee.

The Cable understands that Bristol West MP Thangam Debbonaire, has written to Vice Chancellor Hugh Brady seeking more information on the university’s decision to end some staff contracts early. Brady saw his remuneration increase by £9,000 last year – from £373,000 to £382,000, a 2.4 % rise, making the lay-offs of some of the university’s temporary workers all the more unpalatable. The MP has also requested clarity from the Education Minister on how the Furlough Scheme applies to universities.

University and College Union (UCU) general secretary Jo Grady told the Cable: “Short-term reactions will have long-term consequences and any moves to reduce hours or make staff redundant are premature, unacceptable and counter to the government’s key aim of retaining jobs.

“Universities should suspend any dismissals for at least the period of the crisis and then review staff needs. Staff dismissed at this time will find it almost impossible to secure alternative employment whilst the crisis continues.”

A University of Bristol spokesperson said: “The University is committed to maintaining as many staff on casual and short-term contracts as possible as we continue to navigate our way through the current and unprecedented situation.

“We are very sorry as we know how difficult this will be for those affected by this decision, and our priority is to support them as best we can through this process.”

« This NHS worker is facing eviction, as Bristol rallies to help coronavirus heroes

Students in university-owned halls aren’t being charged if they’ve moved out, but a group of first-year students in privately owned halls have fallen through the cracks and may be forced to cough up £1,500. 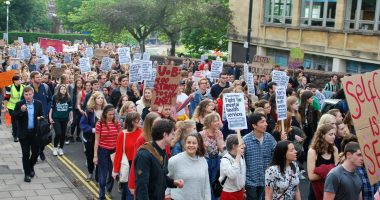