Last September, four months after a planned election could have already reinstated him if a pesky virus hadn’t put it on hold, a famous 2016 campaign-trail pledge by Bristol’s mayor Marvin Rees came to bite him on the arse.

A council committee report confirmed that in 2020-21, our local authority area would be getting nowhere near the 800 new affordable homes Rees promised to deliver annually by then. New figures reveal, in fact, that of the 1,350 to 1,994 homes that were completed each year in Bristol in the four years from 2016/17 to 2019/20, only between 188 and 312 each year were affordable.

Blaming the pandemic’s impact on construction, the document set a new “stretch target” of 500 affordable homes during 2020-21, which is likely to be “almost met” thanks to a forecasted 489 completions. In a deft bit of expectation management, it adds that house building targets are often influenced by a 20% “optimism bias” – meaning 389 affordable homes – below half of Rees’s target – is more realistic.

Still, the report goes on, a minimum of 797 more affordable homes should be added in 2021-22, and at least 1,028 in 2022-23. The council’s recently departed housing chief, Paul Smith, told the Cable’s Bristol Unpacked podcast in September the missed target should be seen as delay, not failure, given the state of 2020 and other non-Covid factors beyond the authority’s control.

Housing dominated Bristol’s last mayoral campaign – those pledges were important because the city’s affordability crisis took hold during George Ferguson’s tenure, with asking prices and rent levels spiralling. In April 2016, a Cable investigation revealed the council had flogged off hundreds of knackered but irreplaceable period homes, a practice that controversially continued under Ferguson, sparking anger just before the election.

Smith stopped that, with about 100 properties refurbished and put back into use as regular council homes or homeless accommodation, or handed over to specialist charities. This was possibly made easier because a plan developed by David Cameron’s government, which would have forced councils to sell their most valuable houses, was scrapped after Theresa May took over as prime minister.

Given that tough context, and with housing set to be just as hot an issue when the election rolls back round – mutant-coronavirus permitting – here we attempt a measured look at Rees-era progress and the challenges the next mayor, whoever they are, will face.

The number of homeless households in temporary accommodation (accepted by the council as needing social housing), as of 31 March 2020, up from 474 in March 2016.

By June, after the Corona-driven ‘Everyone In’ initiative saw many extra homeless people accommodated whom local authorities would not normally deal with, the figure reached 841.

Loads has been written about Bristol’s house prices and rising rents – now above £1,000 on average for all properties. But one factor that really scares the council is how this has  prevented people from moving out of cheaper social housing. Ten years ago, about 3,000 social tenancies became available each year in the city – now that’s down to 1,800. Even if the number of homes built keeps rising, some families will be waiting years for a permanent roof over their heads.

The most affordable homes completed in any financial year – in this case 2018-19 – of Marvin Rees’ mayoral reign.

It’s hard to compare Rees’s record with his predecessor’s – mayoral elections don’t take place at the end of financial years, nor are policies and projects switched on or off when a new leader takes over – but there are trends.

Data shows 462 homes – mostly by housing associations, under projects that likely predated Ferguson – completed in his first year, falling to 394 in his third and fourth combined. Rees started slower, but 621 homes were finished during years three and four of his first term combined.

The number of council high-rises in Bristol.

This figure could tumble – literally – under plans to demolish tower blocks, which will (at least temporarily) reduce affordable housing in the city.

The Cable understands that, following an assessment by multinational consultancy Savills, sites have now been earmarked based on them being expensive to maintain or unpopular. Proposals were supposed to go to tenants and the cabinet last autumn – before the resurgent virus delayed things until at least the new year.

The council won’t say how many homes could go but told us all affected residents will be formally balloted. Cabinet reports say affordable homes will be replaced like-for-like.

The ratio of Bristolians to new affordable homes completed since 2016.

Over the last four full financial years, 1,023 affordable homes were completed in Bristol, estimated as having a population of 463,377 in 2019.

However, in Bristol the proportion of new housing – 28% – let at genuinely affordable social rent levels, which the government has effectively ceased funding, is up there with the best of its peers.

The estimated cost of retrofitting the council’s homes with low-carbon energy sources.

Housing affordability doesn’t just mean the rent. Bristol’s fuel poverty action plan, among many other reports, sets out the impact of being unable to pay to heat homes.

As we cover elsewhere in this issue, making homes more energy-efficient is a vital part of Bristol’s grand plan to hit net-zero emissions by 2030.

But last summer Julian Higson, Bristol City Council’s director of housing and landlord services, warned that carrying out work on all the authority’s 28,000 homes would be “very unlikely” without major government funding. It’s a headache the next mayor will have to deal with.

Bailiffs were trying to evict the woman and her two children a week before Christmas. 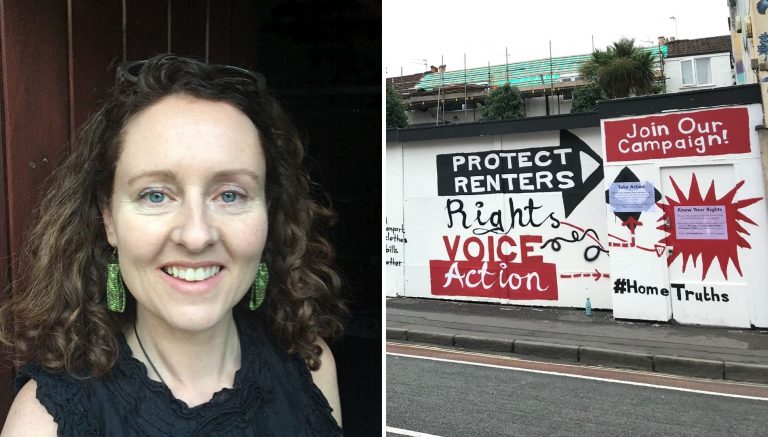 Kate Bower has now left Bristol after struggling to rent in the city and facing discrimination for years. But now she is determined to help make much-needed changes happen.

Renting isn't just for young people. Older renters in Bristol thrown ‘curveballs’ by life are being left financially insecure by the rental market.