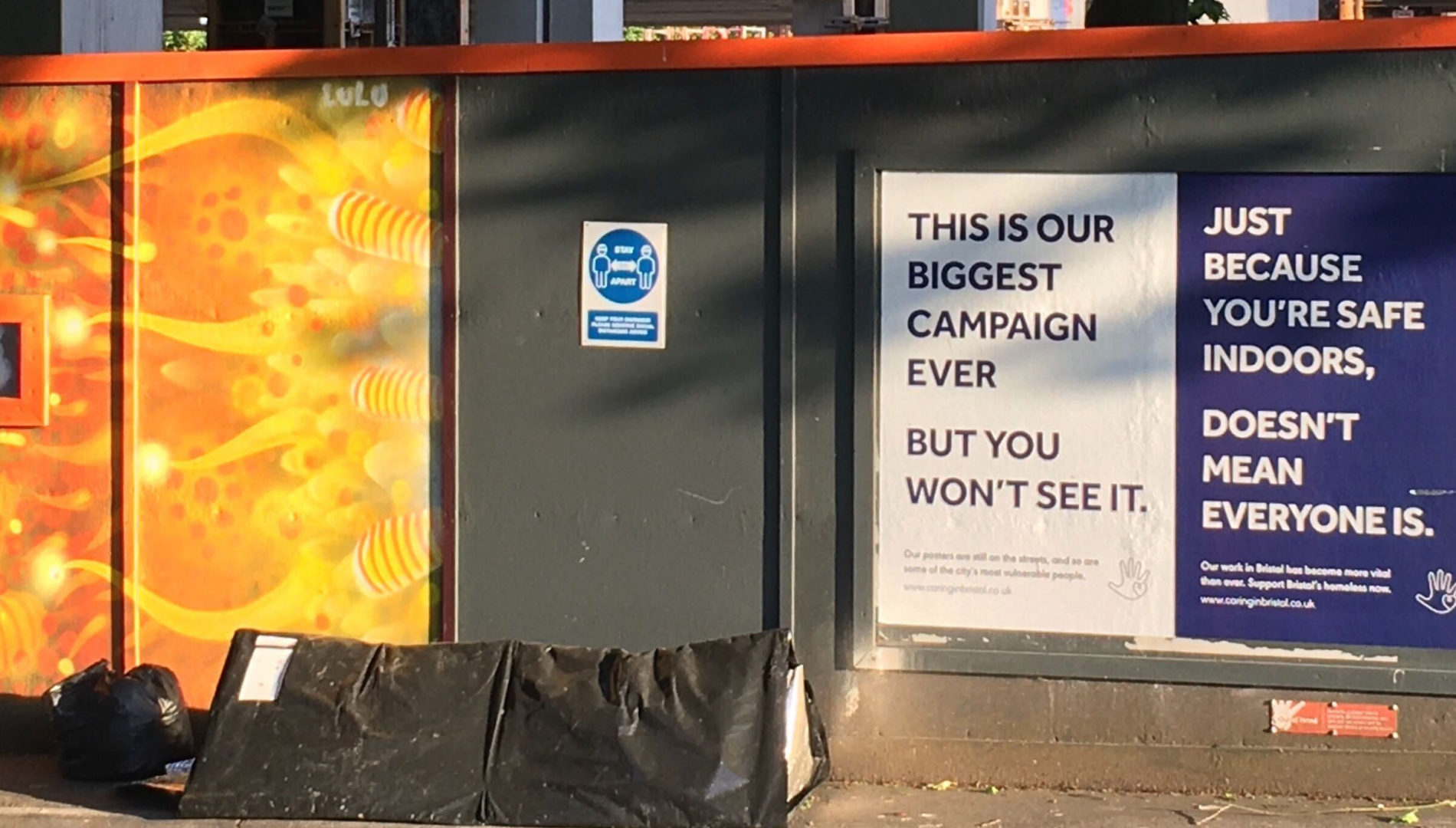 By Hannah Vickers on 2nd June, 2021
CORONAVIRUS IN BRISTOL | FILM | HOUSING BRISTOL | REPORTS: everyone in, homelessness, housing crisis
Copy Link
Bristol City Council carried on support for Bristol’s homeless during the pandemic, long after the government withdrew funding, but now it’s coming to an end and charities are struggling to plug the gap.

Bristol charities are scrambling to find homes for people who’ve had to move out of emergency accommodation as funding for the Everyone In initiative ends.

Bristol City Council has managed to move most people out of the hotels and into longer-term accommodation, but 60 people aren’t eligible for housing support because of their immigration status.

A breakdown of Bristol news, every week

This is in the midst of a growing homelessness crisis, with the number of single Bristolians who are homeless more than tripling during the pandemic, according to new figures, though the overall numbers of people sleeping rough on the streets has dropped considerably. The number of newly homeless people is expected to rise again in coming months, as the eviction ban ended yesterday (1 June), giving bailiffs free reign to start evicting tenants.

Last March, the government gave councils £3.2 million each to place people who were street homeless, sofa surfing and staying in shelters in emergency accommodation. The ‘Everyone In’ initiative was a lifeline to people with No Recourse to Public Funds (NRPF) who had previously been unable to access any help.

As travel was banned as part of lockdown, the council have placed around 1,500 people in hotels over the course of the pandemic so far, regardless of immigration status. It gave people a chance to “stay home” along with everyone else.

When the government quietly pulled the funding for the initiative in May last year, the council kept it going – moving people they could into more permanent housing and keeping people with NRPF status in hotels. It was “an impressive investment from Bristol City Council,” Antonia Cross from homelessness charity Caring in Bristol told the Cable, to keep the scheme going when government funding ended.

But on 17 March the last of the people staying in the hotels – 60 with NRPF who hadn’t been eligible for move-on accommodation – had to leave, finding out just three weeks before.

“They fall through a multitude of cracks,” said Cross. In non-pandemic times they could have moved into a dormitory-style shelter, but that’s not a possibility now, and even when it was, Bristol’s only open-access shelter that doesn’t require a referral to get into is Julian Trust.

Bristol’s homelessness charities have worked together to house who they can, so they don’t wind up back on the street. As Julian Trust has had to close its shelter, the charity has diverted a chunk of their funding to pay for nine people to stay in the hotels until September. “In this way, we are able to ensure that some of the most vulnerable members of our community can enjoy a degree of safety and security that are needed by everyone in these most challenging times,” said Jenny Oates, Chair of Julian Trust.

What does having No Recourse to Public Funds (NRPF) mean?

‘No Recourse to Public Funds’ is one of the aspects of the hostile environment that charities say is particularly cruel, as it leaves people without anywhere to turn for support. They’re not allowed to access social housing, get welfare payments or access statutory homelessness services – or any way to legally support themselves – they’re also not allowed to work

“It’s a designation that deliberately makes people quite vulnerable,” according to Antonia Cross from Caring in Bristol. “It’s designed to make it hard for people to stay in this country, but there’s no proof that that ever works. You just end up with extremely vulnerable people in very exposed situations.”

People with NRPF include asylum seekers, who aren’t allowed to work, claim benefits, get social housing or rent privately, and people from outside the European Economic Area, who can work but if they lose their job can’t access any kind of welfare support.

The NRPF policy cuts people loose from any kind of support, and currently prevents nearly 1.4m households nationwide from being able to access the welfare safety net and get statutory homelessness help.

Bristol Hospitality Network (BHN) – which matches people with NRPF with households who have a spare room – has taken on finding homes for some. A small number have been given a temporary reprieve after being classed as ‘very vulnerable’ under the Human Rights Act and so may be able to continue to be housed until the end of June.

But the majority are still in flux, waiting to see where they’re going next. And charities warn that many of these people could end up back on the street, and unable to engage with services. Helen Kidan, member volunteer coordinator at BHN told the Cable that people on their waiting list are sofa surfing and some are sleeping rough while they wait for a place to become available.

Ben Richardson, Caring in Bristol’s director, said: “We are now facing the devastating prospect of some of these people being pushed back onto the streets. This will see all of that good work undone, with serious and potentially life-threatening implications for some very vulnerable people in our city.”

Opportunities provided by a pandemic

The changes forced by the coronavirus pandemic has provided opportunities for Bristol’s homelessness services to improve how they work. Cross says it has forced charities to stop working in isolation and made them more effective, and exposed the problems with housing people long-term in shelters.

“Shelters have actually been hiding a problem,” Cross told the Cable. “They’re quite ineffective, and can be quite degrading.” Caring in Bristol’s 365 shelter, which had a maximum of 18 people sleeping on mattresses and camp beds on the floor of a community centre in central Bristol was meant to be a short-term option for people while they worked with services to get into more stable, long-term accommodation. People would be allowed in at 10.30pm and have to leave by 7.30am, but would be offered breakfast at a nearby cafe when the shelter closed. It was designed as an emergency shelter for people to stay for one to three nights, and was Bristol’s only emergency shelter that was open every night of the year. But people would often end up with people staying there for months, sometimes years.

Cross says that Bristol now “has a chance to decide how we want to open up as a city. It can be a case where we just go back to square one, where we just open up the shelters and we haven’t learnt any lessons.” She’s hopeful that instead it will be the catalyst for change. Bristol’s homeless charities are working on targeted homeless prevention work and alternatives to shelters that they’re hoping to launch later this year.

But Cross says the city’s homelessness charities are “so beyond capacity” that they’re limited to working with people in specific vulnerabilities, or people eligible for specific provision, meaning that people inevitably fall through the gaps.

“There needs to be more cohesion between organisations, Cross told the Cable: “People often get seen in isolation, we get to see them when it’s almost too late,” adding that at the start of the pandemic Bristol’s homeless charities started mapping out Bristol by postcode and working out which organisations were working where “to find out where the cracks were”.

She said that charities have worked in isolation for too long. “We’re not going to go back to that“.

Bristol Hospitality Network is still in need of hosts and all the Bristol homelessness charities working with people with NRPF are accepting donations:

Read more on: everyone in, homelessness, housing crisis 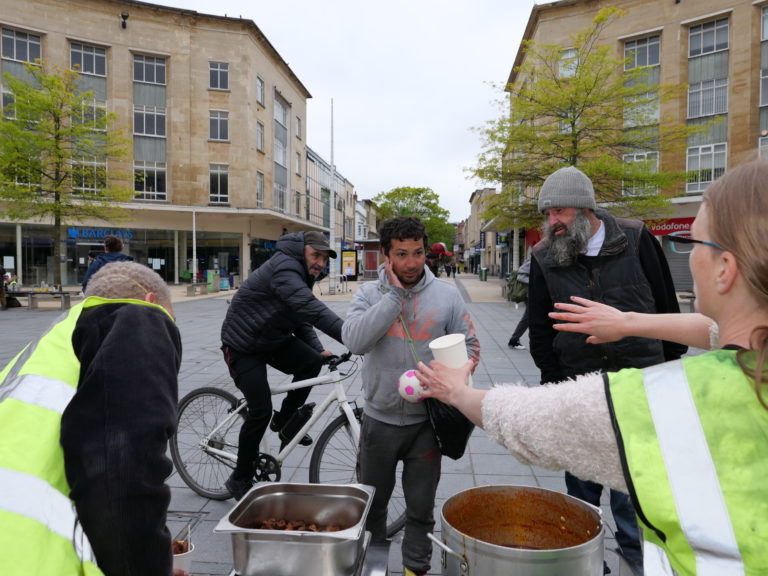