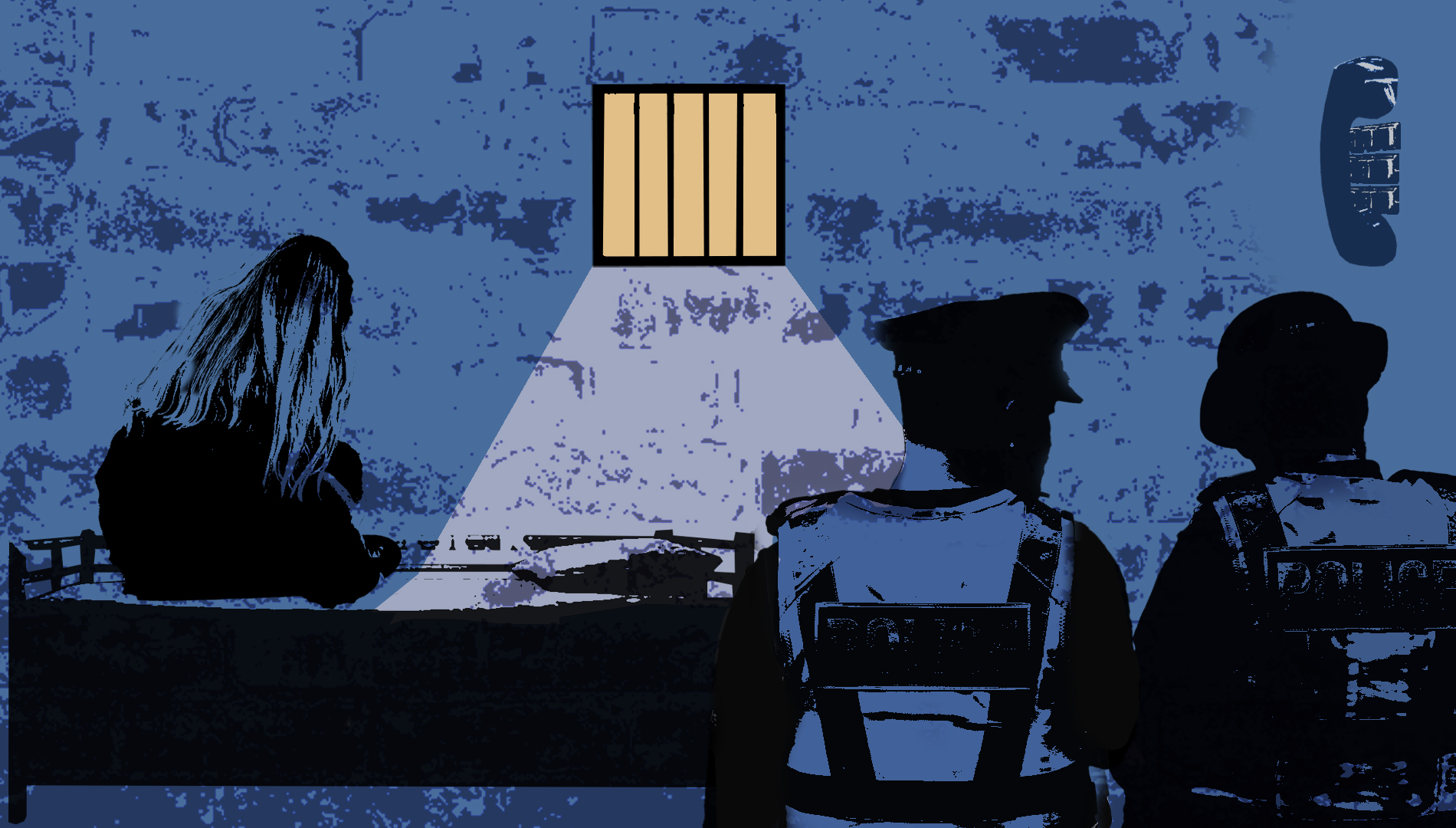 “It felt like hell, I was trapped in a cell, with someone on the door and just wanted my sister to hold me and tell me it was going to be ok.”

What led to Emma* sitting in this police cell, confused and scared? This story goes back years to the estate where she lives in North Somerset. “I’ve been a victim of hate crime for a long time, since 2014,” Emma tells the Cable. She says she has been threatened by a group of men on her estate, but that things are even worse with one neighbour in particular.

“She basically harasses me, calls me a ‘retard’, ‘spastic’, her children call me that, too. Then on the other hand she makes false allegations against me. It’s a ridiculous situation that the police won’t sort out.”

These allegations by Emma’s neighbour ended up with her being charged with a public order offence – for using threatening, abusive or insulting words or behaviour. Emma attended Bridgwater Police Station on 1 February 2020 in relation to the charges, which led to a conviction she is now hoping to appeal after subsequently being diagnosed with Tourette’s.

She recounts following a police officer down a corridor. “I remember seeing a flight of stairs, then the next thing I remember is standing by the lifts.” Emma doesn’t remember what happened between these two moments, but she ran up three flights of stairs and tried to jump over the railings onto the office floor below. “On the video, I’m saying I’m doing this because the police don’t do anything about autism hate crime,” she says.

Luckily, police officers stopped her from falling and pulled her to the floor. After being taken down in the lift, searched and taken to a police cell, she was told she had been refused bail due to concerns about her safety, so now faced the prospect of staying there from Saturday through to Monday. I ask Emma how she felt: “Terrified. I was meant to have an appropriate adult. I was terrified of being in the police station and what was going to happen. I was confused and didn’t understand the process and why I couldn’t go home. It was fear of the unknown.”

The Cable can reveal that after Emma lodged a formal complaint about this, Avon and Somerset Police (ASP) found they had failed in their duty to provide her with an appropriate adult and offer her food while she was in custody on that day.

This is the second complaint by Emma against Avon and Somerset Police to be upheld in the space of a year. In February 2021, the force had to pay out £7,000 in compensation because officers broke data protection laws by using a video of her in distress for training purposes without her full permission. It was on the day at Bridgwater police station that Emma realised this had happened, after an officer said she recognised her from the video.

These revelations come just months after an independent report criticised a series of “shocking” failings in how local services support people with autism and learning disabilities. The report’s author, Sir Stephen Bubb, made a number of recommendations, including establishing a charter to help people understand what rights they have and make sure local services respect them.

At the time, ASP said they had accepted their failings and already carried out a significant amount of work, including appointing an autism lead. But Bubb accused the force of being “defensive”, unlike other agencies that came under fire.

For hours, she had been unable to speak to her sister. “Because I didn’t know about that environment, I didn’t know you could ask for something to eat or drink. I was freezing cold and felt unwell but couldn’t tell anyone. I had a bump on my head. My legs were killing me. I didn’t know what was going on.” Her physical and mental health was checked over by healthcare professionals, who found no major cause for concern.

Vulnerable adults should have an appropriate adult present when they are brought into custody – a relative, carer or social worker to help them understand what’s going on.

Later in the evening of 1 February 2020, Emma was finally discharged into the custody of her sister, who had been waiting at the police station for hours. “I was so pleased, I ran and gave her a hug,” she remembers.

“The police knew I had autism but they didn’t recognise that I couldn’t communicate,” Emma says. “I think people assume that I’m ok but I’m not. Everyone with autism is different and the best person to understand them is someone close to them, like my sister.”

Not only does Emma have autism, but she was later found to have an auditory processing disorder, which means can’t always process all the words when people are speaking to her.

Emma’s sister had left work in a rush to come to the police station, but was told she couldn’t see her. It was only later that evening, after police received a character reference, that she was allowed to take Emma home.

“I’d been denied my basic rights,” Emma says. “If I spoke a different language and [was] refused an interpreter, it would have been discrimination. I was just as confused.

In November 2020, the police’s professional standards department concluded that Emma wasn’t treated unfavourably and reasonable adjustments were made for her, but that she was not provided with the correct access to an appropriate adult, which was deemed a performance and learning matter, and not offered food.

The reason Emma was there in the first place was because she’d been charged with a public order offence following accusations of swearing made by her neighbour. Emma, who was referred for a Tourette’s assessment in 2019 but only diagnosed in July 2020 because of Covid delays, now hopes to appeal the resulting conviction but still feels intimidated and harassed by her neighbours. “I’m still in the situation, the police turn up, she still shouts abuse at me. It’s no way to live.”

It was Emma’s frustration at police inaction over her neighbour’s behaviour that was recorded on body-worn camera footage in late 2019. Emma says she had caught her neighbour on camera mocking her vocal tics and saying that she made up her autism.

“I had it all on camera and the police refused to investigate it,” she remembers. “I had a meltdown, started crying, I was headbutting the floor, it pushed me to breaking point. The police will come round and question me about swearing when I’ve got a medical defence, and there are so many things she’s done and for them to say they won’t do anything about it. It was awful.”

She speaks glowingly about how the police officer handled her distress, calming her down by just talking to her. “He was really good, but finding out that the footage had been shared among the police – that was my worst moment – it was humiliating.

Now, Emma is trying to find out what has happened to the footage since her apology and compensation. “It’s hanging over my head. I just want it deleted.”

How the police responded

Avon and Somerset Police have spoken publicly about their work developing ways of interacting with vulnerable adults, which is being shaped by their autism lead, Adam O’Loughlin, who has autism himself. According to Emma, he has yet to make a real difference.

A spokesperson for Avon and Somerset Police said: “Ongoing issues between neighbours are often the most difficult matters to resolve. Each allegation is investigated and when evidence meets the threshold charges are brought.” They added that people with protected characteristics who think they have been a victim of a hate crime are offered additional support, and any investigation may be reviewed by an officer with extra training in tackling hate crime and advocating for victims.

The spokesperson listed the work of the force’s autism lead which has been recognised by an award, including delivering training for staff in collaboration with local experts, introducing a standard operating procedure to make sure people with autism have an appropriate adult, and giving input to the National Autistic Society’s Policing Guide.

“We know we don’t always get things right and continue to work with partners, independent advisory groups and those advocating for neurodiverse people to ensure our policies and practices are in line with our values of being inclusive, caring, learning and courageous.

“We have publicly apologised to [Emma] for upset and distress caused by a data breach involving body worn footage of her. The footage is no longer used for training, is stored safely and securely and cannot be disseminated.

“A review of [Emma]’s complaint regarding her experience at Bridgwater Police Station on 1 February 2021 found that the service level was acceptable. Nevertheless we apologised and have also ensured learning for custody staff about offering food regardless of the time spent in detention, if it is over a recognised mealtime period.”

On the Building Rights report, the spokesperson said ASP was working with the council and Keeping Bristol Safe Partnership on implementing the recommendations.

Looking to the future, Emma says: “It’s not just about me, it’s about other people. I don’t feel reassured at all and think it would easily happen again.

“When you report what you feel is a serious incident [of hate crime] and the police don’t do anything about it, it’s really unhelpful and reinforces that police see you as a second-class citizen.

“I think there’s too much acceptance that because you’ve got autism or a learning disability you should expect to be abused. We’re supposed to tolerate more and it shouldn’t be like that. By [the police] behaving like that, it reinforces that hate crime is ok. Nobody reports it and it’s just a matter of time until there is another situation like Bijan Ebrahimi.”

*Name changed to protect her identity

If you have been affected by the issues in this story and would like to contact us with your story. Email matty@thebristolcable.org