Bristol goes to the polls again in May. But this isn’t your average local election where different parties battle it out over buses, budgets and bins. This time, we’re voting on whether we should scrap the mayor, just 10 years after we decided we wanted one.

On 5 May, Bristol will be able to vote in favour of keeping a directly-elected mayor, or opt to replace them with a committee system, granting the city’s 70 councillors more power. (This was in place before 2000).

In basic terms, supporters of the mayoral system argue that it provides a single recognisable figure who can set out a long-term vision, represent the city on national and international level and can get things done, unhampered by the political instability so common in Bristol’s history. Meanwhile, those campaigning to bring in a committee system say the mayor has too much power, and isn’t scrutinised by local councillors, who don’t have enough of a say. They argue the committee system would be more democratic and representative of the whole city. 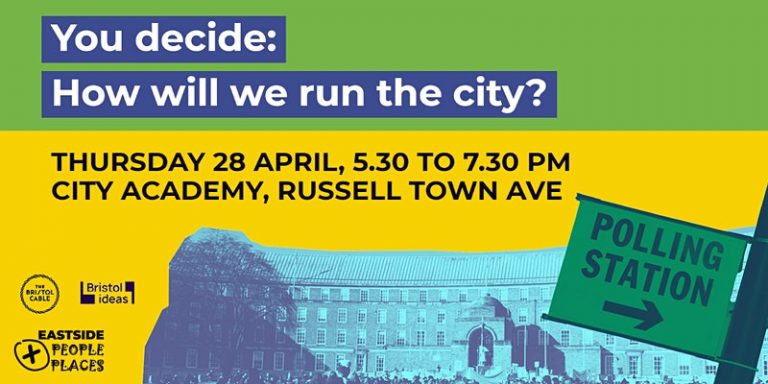 You decide: How will we run the city?

Should one person have the power to set out and deliver their vision for the city over four years? Or should councillors elect a council leader whose feet are held to the fire by councillors? How important is stability, personality, scrutiny and representation in a well-functioning local democracy?

We’ve only had two mayors over just 10 years – independent (former Lib Dem) George Ferguson and Labour’s Marvin Rees. But in that time, the conversation about how Bristol should be run has been divided and at times fraught and vitriolic. The system has come under fire as the mayor clashed with local councillors on big issues, such as where to build Bristol Arena, the Bristol Energy fiasco that lost millions of taxpayer money, and what form of mass transit we need.

These political debates are made even more intense by the fact that the balance of power in Bristol isn’t held by a single party. And now the council chamber is even more politically divided than usual, since the Greens won ground on Labour to become the joint largest party at last year’s local elections.

Get our weekly rundown of essential Bristol news, with special editions on the referendum

Mayor Marvin Rees’ decision to deny any Green councillors a position of power in his cabinet hasn’t exactly helped bridge the divide. When Rees said his heart sinks at the sight of the name of Clifton Down councillor Carla Denyer, who is now co-leader of the Green Party, it gives some sense of the state of the damaged relationship between the Mayor and opposition councillors.

Only 24% of voters turned out at the last referendum 10 years ago, and it’s possible lots of people won’t engage this time either. This referendum might only seem interesting to politics nerds, but it has big implications for how the city is run. Bristol City Council is responsible for how we tackle the city’s big problems, from the housing crisis, to climate change, transport to air pollution. Yes, the local authority has its hands tied to a certain extent by central government funding cuts and limited powers, but it still has a huge influence on our lives. That’s why who runs the council matters.

Whichever side wins, it seems obvious that either the mayoral system needs reforming or more fundamental parts of the city’s political culture need looking at. How can councillors set aside party politics and solve the city’s problems together? How can decisions be scrutinised properly? How can the political leadership represent the whole city as best as possible?

Over the next month, the Cable will try to answer these questions about political systems, culture and power. Our explainers, videos, and podcasts will cover the basics for you and dive deeper into the thorny arguments. We’ll look back into the past and ahead into the future, while scrutinising politicians and campaigners on both sides.

There are ways you can get involved too. We’re organising a panel debate on 28 April where campaigners and commentators on each side will be grilled. Book your free ticket.

We’re also asking readers how informed they feel, which way they’re leaning, and what questions they need answering. Have your say here