Councillors have approved plans for a controversial 212-home high-rise complex on the site of the former Bart’s Ingredients facility on Totterdown’s York Road, despite planning officers claiming it was not “considered a good quality scheme” that contained serious fire safety concerns.

Councillors voted six to three in favour of the plan on Wednesday afternoon, and were swayed by the promise of 30% affordable housing plus a further 35% of homes being available for “rent below market value”.

The development forms part of a wider plan to regenerate the Mead Street area of the Temple Quarter. Developer Donnard Homes demolished the Bart’s Ingredients site, which sits on a brownfield site between the Totterdown Escarpment and the Avon, back in March.

It caused a public outcry earlier this year when local residents claimed the two proposed 11-storey tower blocks would impair views both to and from the multi-coloured houses that line the top of the Totterdown Escarpment – a well-known Bristol view regularly used to represent the city, which is approximately eight storeys high.

And now, the approval of the scheme has sparked outrage among some Totterdown residents, who not only want to protect the iconic view, but criticised the size and quality of the proposed homes.

“The escarpment is an important part of the topography of Bristol,” said Gael Alen, a Totterdown resident. “If you build high rises in front of it, you take an amenity away from the area, the soul and the charm.”

John Bethel from POD Architects who designed the scheme claimed that “all opposition to the plan focuses on one issue, the views to and from the escarpment.”

But planning officers who reviewed the application recommended it for refusal. Councillors heard how one of the blocks only has a single fire escape, which planning officers stated could be amended without the developers needing to submit a new planning application. This lead to some councillors questioning whether a decision on the meeting should be deferred until the developers had had time to make the necessary amendments.

Planning officers also criticised how the design of the scheme meant that many units would have limited natural light, raising concerns about the effects on the wellbeing of residents, especially during the darker winter months and the additional costs of lighting.

Concerns were also raised about the amount of green space residents would have access to, with local Green councillor Ed Plowden saying that the current plans would offer “one tennis court-sized area of space for every 40 dwellings.”

“When you’re reliant on things like shiny paint to get your light levels up, I don’t think that’s great,” he added. “This has been rushed through and there are loose ends about whether it’s safe.”

However, it was judged that the benefits of additional housing outweighed the negative elements of the design, with Conservative councillor Richard Eddy, who chaired the meeting, claiming that the proposal “met the city’s strategic need”.

Conservative councillor John Geater said: “If we refuse this, we will get a reduced height that gets around all the design rules, but there will only be 10% affordable housing.” Green councillor Tom Hathaway “issued a challenge to developers to do better”, before voting in favour of the plan.

After the meeting, the decision was welcomed by Mayor Marvin Rees,

‘Would they have approved this if it was in front of Royal Crescent in Clifton?‘

The proposed development has been controversial from the offset. An online petition started by the Totterdown Residents and Social Action (TRESA) received over 5,000 signatures. The petition and subsequent protests by residents led to accusations of ‘nimbyism’.

But while the famous view is a concern for residents, this is not their only worry.

“There’s a real mix of people here, it’s traditionally a very working class neighbourhood and we’ve got some people who have a real history here,” said Sarah Townsend, a resident of Cambridge Street for over 35 years.

“We’ve got newcomers, there are rehabilitation houses, mosques, churches and loads of ethnicities, but you get to talk to people so easily because we all live so close to each other. Density works here because we’re all in terraces, you lose that ability to meet people when you put them in high rises.” 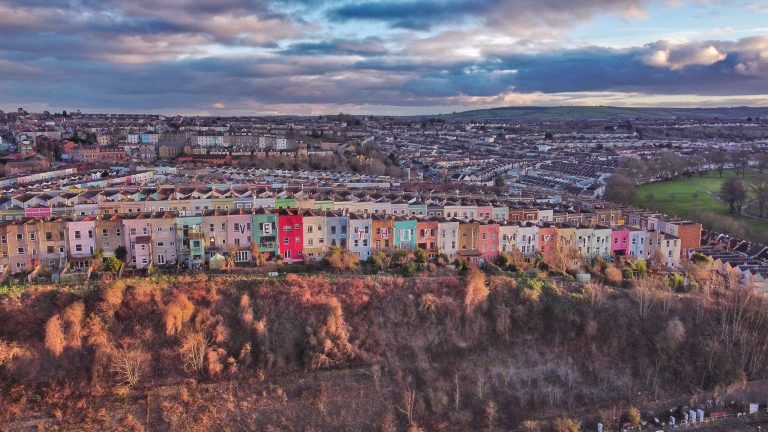 Save our view, say Totterdown residents

“We’re not against development or new people coming to the area at all, we just want conscientious development and a good quality of life for the people that are going to move here,” she added. “Putting people in rabbit hutches with no natural light and no fire escapes doesn’t offer any of that.

“I’m shocked at the quality of debate and analysis by the council. It seems that they are just fixated on these housing quotas and were celebrating the fact that the developer was offering 30% affordable housing, but this should be the norm and they haven’t seemed to properly consider the quality of the housing that people will actually live in.

“Would they have approved this if it was in front of Royal Crescent in Clifton? I don’t think they would even debate it.”

Hugh Alexander, a resident of Richmond Road, where the coloured houses that back onto the escarpment are located, told the Cable: “This will be a blot on the landscape, but more importantly it sets a very dangerous precedent for future developments because it’s substandard in its provisions for the people that are going to live there.”

“People are going to be living in closed off, dark corridors with serious fire hazards and most flats are single aspect [meaning natural light enters from one side] with only a view of the building opposite. It’s like we’ve learned nothing from the 60s and 70s and are just building the slum of tomorrow.

“Paintworks and Wapping Wharf are both held as successful developments with houses of five to six storeys, and something like that could have worked well here. I think Bristol is entitled to maintain its historic landscape and we’re throwing away a key part of our history for what could turn out to be poor housing.”

“Bristol badly needs housing and no one disputes that,” said Simon Hobeck, a Totterdown resident since 2014 and a member of TRESA. “But we want housing built that people are going to want to stay in for a very long time and these developments aren’t conducive to families or older people.”

“We also need improved infrastructure. It is incredibly hard to get a doctor or dentist appointment in this area and the schools have been oversubscribed recently. Developers fail to regard this but point to commercial units at the base of the tower blocks that they say ‘could’ be a doctors surgery or a nursery, but will in fact just go to the highest bidder.”

Speaking to the Cable, councillor Plowden said: “I agree that high density and affordable housing is suitable here, but that does not have to mean high rise developments, which are known to offer lower living experience and higher carbon emissions. The Mead Street Design Brief signed off by the Mayor should have been an opportunity to set a clear vision for this area, but has failed to grasp that challenge despite costing £100,000.”

“I would have liked to have seen more terraced based housing, even as high as seven or eight storeys, which would have framed the Escarpment rather than obscure it. There is a body of research that shows that the same sort of density can be achieved at this height if planned well by proactive City leadership.”

“There is a housing crisis, but there is also a shortage of school places, NHS GPs, dentists and pharmacies, and we have one of the most congested cities in the UK; I have no evidence that the current administration is tackling these issues, nor working in partnership with the NHS to plan for how to integrate with new developments. I would like to see the planning powers we have as a city used more to shape future developments and ensure high quality housing , rather than giving in to developers who either fail to deliver affordable housing or provide low quality design and accommodation.”