As the lights came on in the Cube Microplex cinema on Wednesday night, the audience sat in stunned silence – an atmosphere heavy with emotion. This was the premiere of documentary film ‘I am Judah’, directed by Bristolian filmmaker Bashart Malik and produced by Christina Robino and Saleh Mamon.

The film documents the life of Ras Judah Abundi, a Rastafarian elder of the St Pauls community. In 2017, aged 63, Ras Judah was tasered by the police in a horrific incident that made headlines and sent shockwaves beyond Bristol. The police officer, Claire Boddie, was acquitted at a criminal trial and cleared of any misconduct, she claimed this was a case of mistaken identity. But, as Ras Judah says repeatedly in the film, “This was all about race.”

In 2019, the filmmakers raised money for their independent production through a crowdfunder, and received support from commissioning partners, including the Bristol Cable. But making this film was a tough feat – it took some five years to produce, heavily setback by the pandemic.

‘I am Judah’ is a cinematic portrayal about the man behind the headlines. Speaking in the panel discussion following the screening, Lawrence Hoo said: “The narrative is dictated by the guilty… This film shows the humanity, and the humility, of this incredible man.”

Hoo, a local poet, activist and friend of Judah, was involved in the production of the film and his poetry and commentary features throughout. As do performances by Cleo Lake, former Lord Mayor, involved in The World Reimagined project, a UK-wide charity connecting shared British history and the contemporary quest for racial justice, who organised the event.

In 2017, the same year of Judah’s tasering attack, Avon and Somerset Police were found to be institutionally racist in the handling of the murder of Bijan Ebrahimi. The film weaves an intimate portrayal of Ras Judah’s life among a wider continuum – from the transatlantic slave trade to the uprisings in St Pauls in the 1980s, to the enduring racism of today. As Malik told the assembled audience, “This is a film about justice.”

“I’m here knowing I’m about to be triggered,” Hoo tells me as we walk to the second sold-out premiere in Bristol in the space of a week. “There’s so much trauma in our community and our culture – I’m watching this knowing I have to relive that all over again.”

But the labour of making this film, emotional and practical, they explain, is in the service of the issues that need to be redressed: institutional racism and the over-policing of our Afro-Caribbean communities. While Avon and Somerset Police have said they will commit to anti-racism work, they notably refused to admit that the force is institutionally racist.

With the issues so historic, and deeply ingrained –  is there scope for change on the horizon?

From Jamaica to St Pauls

The film shows the whole course of Judah’s life, from his birthplace in St.Mary, Jamaica in a small time called Roadside – to St Pauls where he first arrives in Bristol, to his new residence in Easton, where the infamous attack would take place.

“St Pauls was a place I always felt safe,” Judah says in the documentary, speaking about the Afro-Caribbean community he lived with there. Growing up in the 70s however, was by no means a safe place for a young black man. Judah’s first run in with the police came in 1975 when he was wrongly accused of assaulting a police officer. Despite eyewitnesses saying he was in fact at a record shop at the time of the incident, he was taken to Horfield Prison. “They beat me, they cut my dreadlocks off and rubbed chemicals into my scalp,” he recalls.

But being wrongly imprisoned and assaulted by police officers was a common occurrence for Black youth in St Pauls in the 70’s and 80’s, he explains, listing the friends who have lost their lives at the hands of the police. With the streets so heavily patrolled, the Black and White cafe was one of the few places the community could socialise freely, and so when that was raided by the police in 1980, it sparked the renowned St Pauls uprising.

Judah speaks of his political awakening, spurred by events such as Rhodesia and the apartheid in South Africa, the civil rights movements in America and independence of Jamaica in 1962. Growing in his Rastafarian spirituality and inspired activists like Marcus Garvey and Steve Biko – he grew convinced of the need to fight for liberation.

Judah became one of the first Black people to work at Bristol City Council as a Sports Development Coordinator and founded the St Pauls Sports academy. In the 1990’s he joined the Race Relations Advisory board, working closely with the police to establish better relations with Black communities; he was by all accounts a pillar of the community.

This is one of the profound ironies highlighted by the film, as Hoo puts it: “If Avon and Somerset Police could treat one of our trusted, respected and loved elders like this – how could they treat our children?”

A case of mistaken identity?

In 2017, Ras Judah was walking his beloved Pitbull Hazel in Easton. He’d put plantain in the oven, he explains in the film – food for him and Hazel to eat on their return. But on that fated day, he would not come home.

Footage of the tasering incident, the crackle of electricity and the indignant shouts from Judah as he was forced to the floor elicit shudders and gasps from the audience, some turning away, unable to watch. Two police officers approach Judah, asking repeatedly if he was Royston McCalla – another wanted person on their list. They manhandle Judah, bring out handcuffs and try to gain entry into his property in the scuffle, then Officer Boddie tasers Ras Judah in the face. 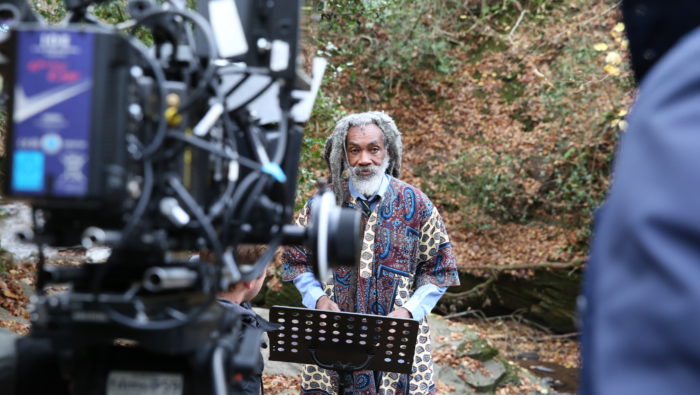 Exclusive interview: “Judah will not be silenced”

The incident is filmed by a friend and neighbour Tom Cherry, scenes which would later go viral. “She put a 50,000 volt taser in my face, and if Tom wasn’t there, I am convinced I would not be here to tell my story today,” Judah says. The incident has left lasting damage – a speech impediment, a mini stroke and emotional scars that Judah will never be rid of.

To make matters worse, Judah is pulled over by police, mistakenly identified for this same man, a further three times in that same year. To this day, no officer has been charged with any wrongdoing.

University of Bristol policing lawyer, Dr Clare Torrible analyses the legal cases made in the trials – and finds them woefully lacking. There was time to check the identity of Judah, who was by this point a well recognised figure of the police. And the subsequent ‘unconscious bias’ training that the police officers in question were tasked with following the incident, had already been done by one of the officers just weeks prior.

With the subject matter of the film reverberating heavily in the theatre, a panel discussed where we go next from here. Hosted by Cleo Lake, the panel consisted of Laurence Hoo, Dean Okai Snr, founder of African Diaspora Public Affairs Committee, and Lee Lawrence, a Restorative Justice facilitator and founder of the Cherry Groce Foundation, a foundation he set up in honour of his mother who shot by police in front of him when he was 11 years old.

The panel was asked what the awareness of the history of the slave trade and colonialism brings to contemporary issues. “It’s important to see how we have been historically de-humanised to understand why we are still treated as less than human,” Hoo answered.

He added that while laws and protocols may have been enacted to protect black communities, this didn’t always equate to change on the ground: “We don’t need anymore laws, we just need them to be acted upon.”

“It’s about fairness,” said Lee Lawrence. “We have to acknowledge wrongdoing and redress this.”

But – as Dean Okai Snr countered – there is also legislation which threatens progress. “The Police and Crime Bill as well as the Nationalities and Borders Bill threatens our communities and gives more licence to the police to repress us.”

Stop and search continues. The recent killing of Chris Kaba by police in London is mentioned, closer to home the case of Antwon Forrest reminds us that there is work left to do.

Hoo says that, in a sense, progress has been made since he grew up as a child in St Pauls, where he thought ending up dead or in prison were the only life courses for Black youth. But he does now think there is hope.

The discussion then became, to what extent does this occur with the police, or around it. Cleo Lake running for Police and Crime Commissioner might suggest that you need to work with the institutions rather than against. For others, the relationship is irreparable.

This whole event is observed by the central character Ras Judah, who sits calmly in the front row witnessing this all, warmly greeting guests as they approach him. Deservingly, the end scenes of the film go to Judah – he is a contented Grandfather. “I live for my grandchildren,” he says, and he hopes his work and sacrifice will promote change.

He can no longer feel safe walking the streets alone, friends insist on accompanying him everywhere. “One day I will go back to Jamaica, and then to Africa, I will take the bones of my ancestors to our homeland. I want to get back into nature and live my spirituality.”