Duncan Campbell began his career facing thirty years in prison for exposing GCHQ – the secret state surveillance arm, in the 1970s. Over the following forty years, he continued to be a thorn in the side of successive governments. He went on to uncover Echelon, the system of satellite interception between Cold War allies. He co-founded the ICIJ (International Consortium of Investigative Journalists) and, with his husband Matthew Fowler, created the programme which was used to interrogate the Offshore Leaks.

The Cable met with Campbell around the 40th anniversary of the ‘ABC’ trial in 1978, when Campbell, his colleague Crispin Aubrey, a Time Out journalist, and John Barry, an ex-signals intelligence operative turned whistleblower, were in court facing charges of breaking the Official Secrets Act and espionage (‘ABC’ comes from their names).

A poster from the time of the trial. Credit: Crispin Aubrey Legacy Fund

Before Campbell’s 1976 article, titled ‘The Eavesdroppers’, the acronym GCHQ (Government Communications Headquarters) had never appeared in print. Set up during the Second World War, the agency enjoyed total secrecy: “They lived in a bubble with no accountability or control”, says Campbell. So how did he uncover it?

It began with a schoolboy cycle ride. Campbell and a young friend, both amateur radio enthusiasts, came across what seemed to be a radio mast. Enquiring about it in the nearby village in the chippy, they were told it was a secretive place, about which none of the employees would mutter a word.

Years later, via degrees in hard science which he credits with giving him the logic and forensic attention to detail that has served him as an investigative journalist, Campbell had started freelance reporting. Over the years, he’d held on to his notes about the Scottish facility, which he had elaborated on with details collected from phone books about all the other GCHQ sites in the country.

“There was no secret about us doing the story,” he recalls. “Early on I rang GCHQ and said, ‘Can I speak to your press officer, and get some basic information?’. The switchboard were completely baffled because they thought they were completely secret.”

He was passed to a librarian who was “polite” but didn’t give any proper answers. “Two days later my phone was tapped, they started following me around. I didn’t know at the time. It was MI5, they were very good, as opposed to some of the people who followed us around later who were appalling.”

‘The Eavesdroppers’ was published in Time Out in May 1976, co-authored by American journalist Mark Hosenball. They outlined the scope, locations and duties of GCHQ – to the fury of the surveillance establishment.

“That article caused shockwaves across the secret state,” he says he learned afterwards. “It made me a marked person.”

The state could not find evidence, however, that Campbell had broken the Official Secrets Act – he had simply collated information in the public domain, and used American sources. That left the secret service with “unfilled rage”, says Campbell, which was why they turned their fury on Hosenball, ordering his deportation. That, in turn, was picked up by the National Union of Journalists (NUJ) and became a cause célèbre.

He continued his research despite being targeted by the state. The next year, he’d been working with Crispin Aubrey, who worked at Time Out – which had a radical editorial line in the 1970s. Together, they went one night in February 1977 to visit John Berry, an ex-SIGINT operator turned whistleblower, in his flat in Muswell Hill.

“When we came out into a dank rainy night on north London, suddenly these characters came out and one of them said, We’re arresting you on suspicion of breaking Section 2 of the Official Secrets Act” – referring to the section making it illegal to be in receipt of official secrets.

At first Campbell thought “it was a bit of a joke”, he says, and got out his press card. But it wasn’t.

The trial began in September 1978, and Campbell was facing thirty years in prison on espionage and secrecy law charges. The state, already prevented from having a secret trial, had negotiated with the courts to be allowed anonymous witnesses, but was still struggling with how to charge the three with breaking the Official Secrets Act while not disclosing any information about GCHQ at all.

It was an irrational premise, which soon descended into farce, with state witnesses getting themselves caught up in knots trying to evade simple questions. The star witness for the prosecution’s name was blown – Colonel Hugh Johnstone was known as the ‘don of the surveillance underworld’.

The government tried to charge the publications which had published Johnstone’s name with contempt of court, but nevertheless “It started to be a big piss take from then on,” says Campbell.

But the consequences extended far beyond the reform of the Official Secrets Act: “We blew the phone tapping system with the Interception of Communications Act, which started to impose legal controls on GCHQ and on police telephone tapping.”

While Campbell pieced together the story with “good research and a couple of sources”, he was proved right with the publication of the Edward Snowden leaks thirty years later. But Campbell is no stranger to playing the long game. “Looking back, the most impactful stories were the ones that had absolutely no traction at the time,” he says.

Yet, “it was the naissance of mass surveillance and we now know how that happened. I never dared to say completely what I thought when I was reporting because I thought, ‘Well, people already think I’m overstating’, if I say what I really think people would think I’m loopy,” he recalls. “I now know that I understated it from the Snowden documents, that I had understated what they were doing.”

Campbell has covered a wide range of topics – he investigated the government’s response to the AIDS crisis in the 1980s and 1990s, and co-founded the ICIJ (the International Consortium of Investigative Journalists) in 1997, with whom he and his husband worked on the Offshore Leaks in 2015. Most recently, he wrote an explosive piece for the Intercept on the Trump/Russia investigation.

The landscape has changed dramatically since The Eavesdroppers hit the newsstands in 1976. “We are suddenly in the era of massive leaks,” he says, referring to Snowden, Wikileaks, Offshore leaks and most recently the Paradise Papers.

“There is also a huge blurring of the boundaries, so governments can exploit their ability to pull information out of private companies reservoirs, you have for example PRISM system, which interacts with Sky and Google and everything else,” he says. “What is the private companies’ property, to be used for advertising, is being mined by some governments. These are enormous changes in scale. Can society survive this going on? I would say yes but not society as we know it.”

However, the issue of surveillance and privacy has always been his focus. He was hugely disappointed that the seeds of reform, via a range of resolutions, nurtured by the European Parliament around the turn of the millennium– and for which he served as an expert witness – were ditched in the aftermath of 9/11.

Nevertheless, Campbell says there is “vastly more transparency” now, with regard to the surveillance state, “but at the same time, people’s sensitivity has almost completely eroded”.

Why should people care about it? “Because of the effects on their integrity, the way that things you don’t know about can be used to adversely affect your life, because it greatly disadvantages citizens against those who have the information and the power,” he argues.

Bristol’s changing hostels in the age of Brexit » 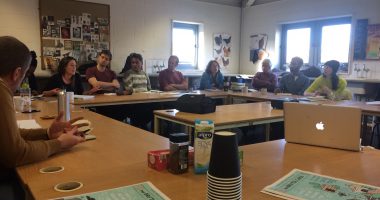 This month: issues and stories we focus on

Got any leads? Wonder what Cable content is being researched behind the scenes? Check out our media Coordinators’ areas of focus… This month Alec (@alecsaelens)... 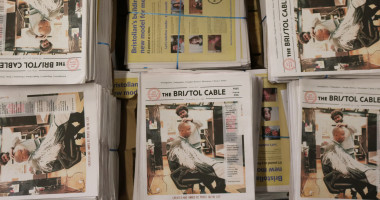 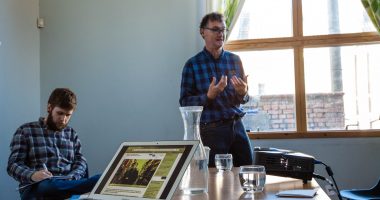 “You have to change things”: Interview with leading investigative journalist 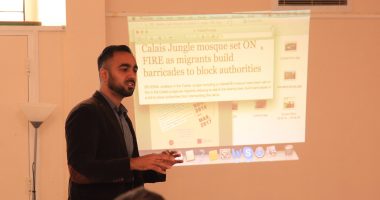 by Lorna Stephenson on 3rd October, 2016

How can journalists best tell the stories of people they meet in crisis situations? Al Jazeera’s Shafik Mandhai spoke to the Cable about his experience... 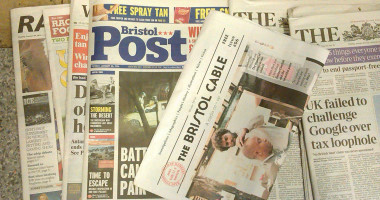 Who owns your local media?

A look at the ownership structure of Trinity Mirror, the company behind Local World and Bristol Post 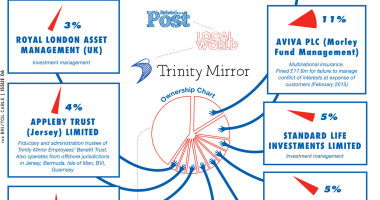 City Bristol And Beyond Ideas And Action Features Edition 6

Destination unknown: Trinity Mirror, the Bristol Post and the erosion of local media

Taking the ‘local’ out of Local World, and the journalism out of our media