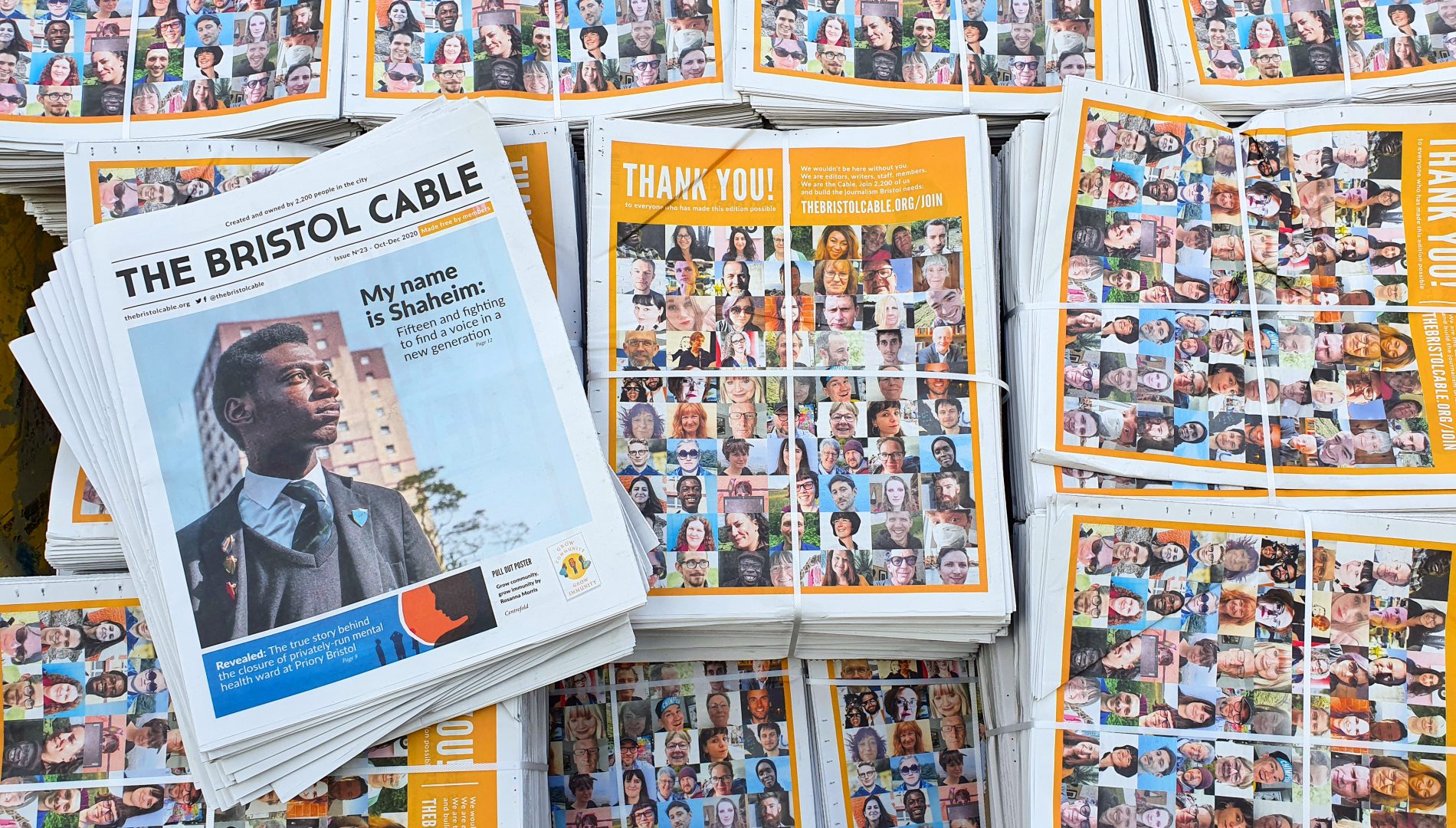 The Cable is not your average newspaper.

In 2014, the UK’s journalism industry was at rock bottom. 2012’s Leveson Inquiry report revealed systemic, decades-long criminality by the tabloid press in order to get ever-more sensational ‘scoops’ to sell papers.

Trust in the corporate-owned press was at an all time low, at a time when papers really needed it – their business model was in freefall, as internet firms were scooping up the ad revenue. Local investigative journalism was the first to take the hit, and had been extinct for some time.

A small group of volunteers in Bristol decided to do something about the failures of corporate-owned local media – they organised, crowdfunded, and built a worker owned new-media outlet: The Bristol Cable.

As a result, Bristol now has its own investigative digital and print newspaper, 100% owned by thousands of local people, free to access for all.

We are rooted in local communities, but we’re also a leader in the global movement to reinvent the media industry as a sustainable, democratic public service.

We can’t do it without you.

How does it work?

We are a small, dedicated not-for-profit team, currently operating on a shoestring budget, funded by membership contributions (35%), grants (60%), and ethical non-corporate advertising (5%). Our mission is to become fully member-funded – find out more.

We are led, and held accountable, by our members. Big operational decisions – e.g. ‘Should we apply for grant funding from Google?’ – are voted on at the AGM. Smaller questions are occasionally asked of the membership throughout the year – e.g. callouts and polls for content/event ideas – via the members newsletter and on social media.

You can be involved as much or as little as you like – there is no obligation to attend an AGM or answer any of the callouts, if you just want to support us financially and enjoy our work.

On the other hand, we invite you to engage even further than voting if you’d like to – for example, as a volunteer, or if you’re a venue owner or in a band we could partner with you for events. As well as being a media organisation we are a community, and we engage our community as best we can.

All of our work is made possible by people like you, who become member-owners. With our pay-what-you-can system, you can sign up for the price of a pint, one hour’s wages, or the tenner your Nan slips you at Christmas when your folks aren’t looking.

By joining, you are building a sustainable investigative newspaper for Bristol that is relevant, reliable and accountable now and into the future.

Find out more about the value of being a Cable member here.

The Cable so far…

Our membership model means that Cable journalists can focus on digging into important stories that can be costly and risky, but which can help make Bristol a better place.

Our journalism has influenced council processes, led to criminal charges, demystified local democracy, been cited in parliament and used as a case study in academic studies.

The Cable is committed to financial and organisational transparency, so we have a page dedicated to it. Visit the Transparency page where you can find out everything about our finances, decision making, data privacy and more.